Jim LaFarr: I was shocked at big primary win, but ‘there’s still a lot of work to do’

Having won the June 25 Republican primary by nearly a thousand votes, Jim LaFarr, who also has the Conservative line, is the heavy favorite to become Warren County’s next sheriff. But he’s not getting ahead of himself.

“There’s still a lot of work to do,” he said. “I’m not Sheriff-elect yet. Now we start working toward November.”

He said the “only thing different now …

END_OF_DOCUMENT_TOKEN_TO_BE_REPLACED

Vying to be Sheriff

Warren County Sheriff Bud York is retiring. Shawn Lamouree and Jim LaFarr are seeking the Republican nomination to succeed him in a June 25th primary.

The Republican nominee becomes the favorite to win the November election, though both candidates could continue their run on third-party lines. So far no Democrat has entered the race.

Both contestants in the GOP primary are long-time members of …

END_OF_DOCUMENT_TOKEN_TO_BE_REPLACED 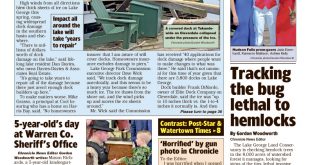