Jim LaFarr: I was shocked at big primary win, but ‘there’s still a lot of work to do’

Having won the June 25 Republican primary by nearly a thousand votes, Jim LaFarr, who also has the Conservative line, is the heavy favorite to become Warren County’s next sheriff. But he’s not getting ahead of himself.

“There’s still a lot of work to do,” he said. “I’m not Sheriff-elect yet. Now we start working toward November.”

He said the “only thing different now is we won’t be working off a list of registered Republicans. Now I can knock on every door, and I’m looking forward to it. It has brought me great joy.”

Lamouree: Decision in next 2 weeks

Mr. Lamouree still has the Independence Party line. He said he will sit down with his family and campaign committee “and make a decision what to do in the next two weeks. Without the Republican endorsement, it becomes a heavier lift in November.”

No Democrat is running.

Asked how he reads the primary results, Mr. Lamouree said, “I guess people are inclined to look for a change from what they’ve known for the past 11-1/2 years in the Sheriff’s Office.”

He said he was “very disappointed” when he saw the final results Tuesday night.

Undersheriff is an appointed position, so if Mr. Lamouree doesn’t win the general election, he’s likely out of a job.

“I’m sure I’ll land on my feet,” he said. “I’ve had several people reach out to me in the last few days.”

Would Mr. LaFarr consider keeping Mr. Lamouree? “I don’t know how I could keep him,” he said. “It’s not a personal thing, but it would have to be a six-figure salary to retain an employee with that amount of experience. If money in the budget were available, I think it might be better spent on officers on the street.”

Sheriff Bud York strongly backed Mr. Lamouree as his successor. Mr. LaFarr said several people told him they were upset by that. How did he feel?

“I was hurt,” Mr. LaFarr said. “I’ve worked with him for 11 and a half years, and I know I have served him well. In anything I do, I never want to embarrass my family, the Sheriff’s Office or the profession. I strive to do everything with excellence.

“For him to come out so hard, it hurt…I’m going to take every day as it comes, and go into work with the same healthy attitude and hope different opportunities present themselves and respect the sheriff. He’s our sheriff until December 31st.”

Sheriff York hadn’t responded to a query by press time.

Mr. LaFarr said he and his wife were out knocking on doors in Diamond Point the night before the primary. 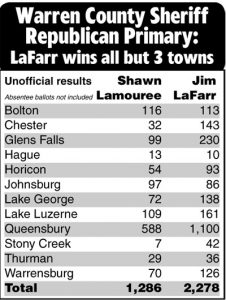 “We worked every day like we were 10,000 votes behind,” he said. “Every day I woke up thinking that I had to make up ground and get to it.”

He said “people who have experience in politics have told me that ‘all things considered, the margin of victory is based on the amount of work you put in and the your commitment to a grass-roots campaign.’

“I knocked on a door in North River, and they said I was the very first candidate who came to their house and knocked on their door.”

He said it was a conscious decision.

“When we got the signs, I said, ‘We will not put signs in right-of-ways, only on the lawns of people or businesses who have declared their support.’ We put out 700 signs in a week.”

He said only in the last two weeks of the campaign did he concede the importance of name recognition and allow signs to be put in right-of-ways.

The night of the primary result, Mr. LaFarr says, “Everything was so emotional. My wife Dori and I were so invested for so long, and we were surrounded by this extended family of friends and supporters who poured their hearts and souls into this.”

“I will say this about Jim LaFarr,” said Warren County Republican chair Mike Grasso. “I have never seen a candidate work as hard as he did, and he started two years ago.

“All other things being equal, if you go out and knock on doors to get signatures and people see your face, and then you go and knock on their door again and ask for their vote, people are going to vote for you.

“The guy who is working the doors is going to get the vote.”

Mr. Grasso told The Chronicle that “certain campaigns get the vote out and reach more people. Sometimes races boil down to who’s more popular in the community and who knows more people and who can get those people out to vote.”

He said Mr. LaFarr “is a local guy who grew up in Queensbury and knows a lot of people,” adding he thought both men are qualified to be sheriff.

“From my perspective, Shawn [Lamouree] had more experience actively running the place and doing budgets, but that’s not to say Jim won’t be able to run the facility.”

Are the results a repudiation of the County GOP and Sheriff York?

“I don’t see that in the least little bit,” said Mr. Grasso. “Jim is from Queensbury. Shawn is from Delmar. Jim made relationships in school, in high school, and has lived here forever. It stands to reason someone from here would win.

“It was the #2 and #3 guys in the department running. They picked the #3 guy…And if Bud York ran again, no one on the Republican side would challenge him, in my opinion. This was no repudiation of the Sheriff. The crime rate is down, we don’t have lawsuits in the jail like other counties.

“This was not a referendum against the committee. It was a split vote, and it was the right thing to do to let the people decide. It’s a stretch trying to go down that road.”

Share
Previous Next from Adk. Theatre Fest: Dark Ages vs. eternal optimist
Next 5 Culvert once doomed, now a relic resurrected