Vying to be Sheriff

Warren County Sheriff Bud York is retiring. Shawn Lamouree and Jim LaFarr are seeking the Republican nomination to succeed him in a June 25th primary.

The Republican nominee becomes the favorite to win the November election, though both candidates could continue their run on third-party lines. So far no Democrat has entered the race.

Both contestants in the GOP primary are long-time members of the Sheriff’s Office. 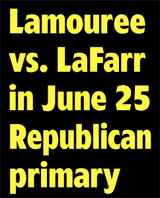 Mr. Lamouree, 52, started with the Sheriff’s Office in 1988, and has been Undersheriff since 2012. He already has the Independence Party line in November.

Mr. LaFarr, 48, joined the department in 1991, and has been a Major since 2012 and now oversees administrative duties. He has the Conservative Party line in November.

Mr. LaFarr grew up in West Glens Falls, and graduated from Queensbury High School in 1989 and Adirondack Community College in 1991. He said he was the first person in his family to graduate high school, and that he always wanted to be a police officer. He said he has “served in every capacity in the Sheriff’s Office — uniformed officer, investigator, sergeant and now lieutenant.”

He notes, “I started the police bike unit in 1997 in Lake George Village, I’m a scuba diver and have gone through numerous law enforcement training.

“I’m also an assessor for the New York State Division of Criminal Justice Services, where I travel around the state and audit police departments. I really enjoy that, and always bring something away from those audits.”

Mr. Lamouree grew up in Bethlehem in Albany County and graduated from Bethlehem High School in 1984 and from Hudson Valley Community College in 1986 and SUNY Brockport in 1988. 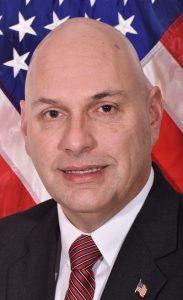 His father Alfred was a police officer with the Bethlehem Police Department.

Mr. Lamouree says, “I saw what he did for a living and wanted to help the community. I’m a huge advocate of helping people.”

What’s key to the job?

Mr. Lamouree says the key to being a good law enforcement officer “is being able to make decisions, have a calm demeanor, have the ability to de-escalate a situation and treat people fairly and with respect.

“A Sheriff needs to be a leader and a good administrator…Inherent with being a leader is to have integrity. An example of integrity would be conducting investigations without fear or favor. In other words let the facts speak for themselves.

“I know how to run the sheriff’s office. I’ve been Undersheriff for seven years, doing the majority of the duties. The Sheriff’s Office is the public safety answering point for the county through 9-1-1, and we dispatch fire, police and EMS throughout the county.

“We also have a 186-bed correctional facility with 88 full-time correctional staff. People see us driving by in a car, but that’s just a portion of what we do.”

Mr. LaFarr says the key to being a good law enforcement officer is “people. You need to understand that your job is customer service. Our job is about people, and we need to be able to connect with people.

“A Sheriff needs to be accessible, responsive and needs to listen to people, and needs to create an environment where people know they can talk to a sheriff’s officer. It’s about sincerely caring about the community, not because you’re supposed to but because you’re committed to it.”

Mr. LaFarr has numerous civic involvements. “I’ve been invested in this community, as an ambassador for the Chamber of Commerce, on the board of Kiwanis, or my involvement with Big Brothers Big Sisters.”

Of running for sheriff, he said, “We started planning three years ago, and in January, I got 800 signatures for the petitions myself. That turned into something very rewarding.

“I’m involved in activities and events that allow me to connect with people, and I’m going out knocking on doors every day.”

Is it a hard job?

We asked if being sheriff is a hard job.

“It’s a demanding position,” Mr. Lamouree said. “You’re expected to know corrections, business law, penal law, traffic law, and you have to be aware of the changes coming and how they might impact you providing public safety. For instance, bail reform. We’ve received guidance from the New York State Sheriff’s Association and have talked to [District Attorney] Jason Carusone. It’s a huge change. The people being incarcerated is going to decrease.”

He said law enforcement work “has changed. There are higher expectations from the public, who sees TV shows and expects crimes to be solved in 30 minutes.”

Mr. Lamouree said he has developed an application for smartphones “to allow people to better communicate with us. There will be push notifications about road closures and other emergencies, and people will be able to send in tips about potential crimes, and research sex offenders.”

He said the “app” will be out in the next few weeks. 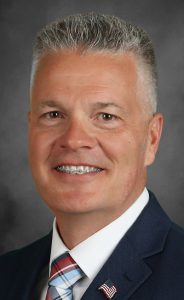 Mr. LaFarr said law enforcement work has become more difficult, “because there’s a lack of public trust. Everyone is skeptical of police officers, and that makes communicating with the public very challenging. And we’re doing far more with far less. We’re on the water, in our schools, on the roads.”

Opioids are the number-one concern for both sheriff candidates.

The biggest law enforcement issue in the county is “the ongoing opioid crisis,” Mr. Lamouree said. “It affects all levels of society: police officers, doctors, lawyers. Not one segment is untouched.

“I try to take a community approach. Arresting people is not going to solve the problem. Education and treatment is key. That’s why I’ve been involved with ‘Hometown vs. Heroin,’ have participated in panels, and am on the board of Freedom Machines, which fixes used bicycles and donates them to people in recovery.”

Mr. LaFarr says, “We’re in the midst of a heroin epidemic which lives between the cracks. We have to try to keep that evil at bay.”

If elected, he said, “We would have to work at it from every angle possible…If schools would be willing to participate, we will offer programs to raise awareness and educate our children. We will implement programs and offer services to inmates who are struggling with addiction. Neighboring agencies are having success with these programs and services. The goal here is to reduce the rate of recidivism.”
Will loser in the primary keep going?

We asked the candidates whether they’ll continue their campaign in November even if they lose the Republican primary.

Mr. Lamouree said, “I’ll look at it. I’ll let the committee and my family look at it, and re-evaluate.”

Mr. LaFarr said that even if he loses the Republican primary, he will continue on to November.

“I think it will be a very tight race,” Mr. LaFarr said. He said the fact that the Warren County Republican Committee didn’t endorse Mr. Lamouree “was my first huge victory.”

He says, “I will win. You have to be confident. I will continue to work very, very hard. I’m not leaving anything on the table.”

Mr. Lamouree said, “I feel everything is headed in the right direction. With the change in the primary date, it creates a lot of unknowns. There’s a potential it could be close. It’s going to come down to who gets the vote out.”

No Democrat so far

Lynne Boecher, Warren County Democratic Chair, tells The Chronicle, “No Democrat to my knowledge has stepped forward to run for Sheriff in November.

“As for the Republican primary, they are both quality men, and we are not weighing in at all. We respect the primary process.”

Gordon: Consensus is 2 worthy candidates, race will be very close

Most Republicans won’t say who they support, even off the record.

But lots of folks I spoke with call the primary a no-lose situation — two very worthy candidates with the necessary experience to do the job as Sheriff.

Both men are out and about a lot, hitting public events and meeting people.

The expectation is the race will be close and that the candidate who makes more meaningful connections with voters will win.