Look, ma, no hands! but repairs on way

The faces on the landmark clock on Glen Street were alarmingly bare of late, when the hands on the south face were removed. 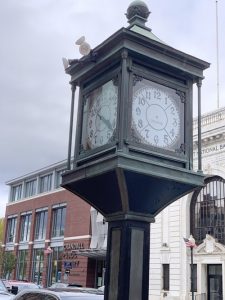 But its time isn’t over permanently.

“The clock is being fixed,” Chuck Gohn said in response to a Chronicle query.

Mr. Gohn is the president of Associates of Glens Falls, the insurance agency that owns the clock and stands just behind it.

END_OF_DOCUMENT_TOKEN_TO_BE_REPLACED

Number-one is Blue World by the pioneering saxophonist John Coltrane, who died in 1967.

Number-two is Halloween perennial It’s the Great Pumpkin, Charlie Brown by Vince Guaraldi. It dates from 1966.

END_OF_DOCUMENT_TOKEN_TO_BE_REPLACED

The fourth Republican, Rachel Seeber, previously served two terms on the board, then left two years ago to challenge incumbent Democrat John Strough for Town Supervisor. She …

END_OF_DOCUMENT_TOKEN_TO_BE_REPLACED

The BBC reported last week on a study that found heart attack survivors who have dogs live significantly longer than those who don’t. It postulated that dog owners walk more, thus improving their health.

I — and any dog owner — can tell you it’s true but only part of the reason. Dogs make you feel better across the board. Who doesn’t benefit from a …

END_OF_DOCUMENT_TOKEN_TO_BE_REPLACED

You may have noticed some new activity on South Street recently in the form of the all-new Studio 58 Cocktail Lounge and Beer Garden. The location is 58 South Street, formerly the Irish Pub, which closed in 2015, and the short-lived “58 Bar and Grill,” in 2017 and early 2018.