Battles lines are being drawn as Warren County supervisors debate how the county divides $26-million in sales tax revenue among its 11 towns and the City of Glens Falls. 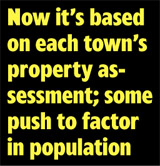 That discrepancy has led to discussion about possibly changing the formula to one based on both assessment and population.

A proposed formula based 50% on population and 50% on assessed value would see the lake towns lose significant revenue Bolton would lose $1.5-million, Horicon $469,320) while Queensbury would gain $1.48-million and Glens Falls would get an additional $1.2-million.

Supervisors from Glens Falls and the towns that would benefit from such a change represent 781 weighted votes, more than enough to pass. But it’s unclear what path the Board of Supervisors may take.

The current distribution formula is mandated by law, and doesn’t include Glens Falls, which takes its sales tax directly from the state. 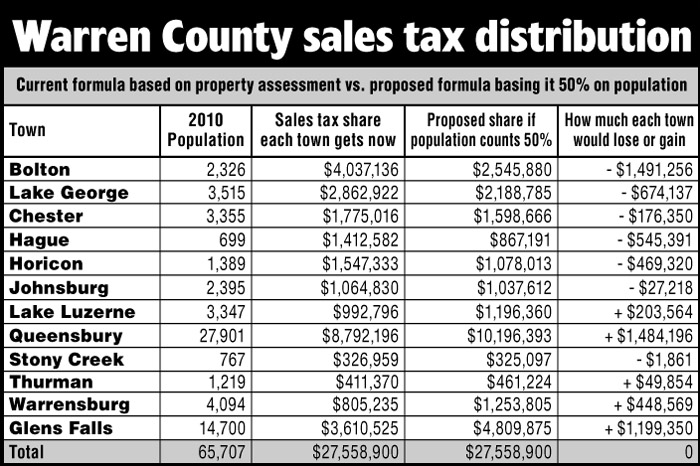 Any change would likely require that Glens Falls opt out of that process and would need state legislation, county administrator Ryan Moore said.

A board workshop was scheduled for Wednesday, Jan. 16, to discuss the issue.

Warrensburg Supervisor Kevin Geraghty told The Chronicle, “I have to explain to my town board why we receive such a small amount of sales tax,” He brought the issue to a head when he went public at the October Board of Supervisor meeting.

Lake Luzerne Supervisor Gene Merlino has been talking about the issue for years amd says, “It’s got to be changed somehow…Warrensburg is the second largest town in the County and they get less sales tax money than Lake Luzerne,” which receives $992,796.

Conover: ‘I hear the concerns’

Bolton Supervisor Ron Conover, just elected to his third term as Chairman of the Board of Supervisors, says he understands the “real concerns some smaller towns have at the municipal level, and we owe it to them and to ourselves to have a full discussion and get everyone to the same level of understanding.”

But Mr. Conover says that the six lake communities — Bolton, Lake George, Chester, Hague, Horicon and Lake Luzerne — provide almost 50% of the county tax levy. Add in Queensbury, which receives $8.7-million in sales tax, and Mr. Conover says “three-quarters of the county tax levy collected to run county government is being paid by those seven municipalities. That means the levy of the other towns is significantly lower.”

He argues that those towns “pay the lion’s share of the costs to run the county but don’t use the proportional amount of services like the jail and public works and social services.”

Mr. Conover said he believes “many issues are better addressed in appropriation, not turning tax policy on its head…I hear the concerns. I think we all do. And I’d like to believe we can get to a place where we understand the plight of some of the smaller towns and have more empathy in the appropriations process.”

Queensbury Supervisor John Strough says “there is merit” to Mr. Conover’s argument that the towns with the highest assessed value pay much of the costs to run county government.

“It would be nice for Queensbury to get more revenue and reduce our taxes further,” he said, “but it wouldn’t be fair to not discuss how a change would burden each community in the county…Maybe we’ll decide the system we have now is fair.”

Dickinson: Take $, take our bills, too

Lake George Supervisor Dennis Dickinson, whose towns would stand to lose $674,137 in sales tax revenue if the county adopted the 50-50 formula, says, “I think it’s a really bad idea. If they want to take $100,000 away from me, they need to take my bills, too.”

Horicon Supervisor Matt Simpson says, “The picture being painted is that lakefront communities aren’t paying their fair share, and I strongly disagree…More of the expense of running county government is being paid by our high assessed value, and we don’t get the services in return. For instance, the airport runway extension. That would be of little benefit to Horicon.”

All five Glens Falls supervisors say they are in favor of looking at changing the sales tax distribution formula, especially if it would mean an additional $1.2-million in annual revenue.

“It could be a windfall for the City of Glens Falls,” Ward 1 supervisor Jack Diamond said. “The concept of basing it partly on population makes a lot of sense.”

Ward 3’s Claudia Braymer said, “The way the sales tax is distributed now is unfair to certain communities like Glens Falls. The process needs to be modernized based on the changing circumstances since it was established…More money flowing back to the more populated towns seems more equitable to me. I don’t think sales tax has anything to do with assessed value.”

Ward 4’s Bill Loeb said, “Any agreement shouldn’t just be made and then forgotten about. It should be reviewed.”

Ward 2’s Peter McDevitt said, “We do need a change, or some modification. Glens Falls and Queensbury are entitled to additional revenue…There’s a middle road of sanity here. The world is not coming to an end. We’ll take the time and make the right decision.”

Ward 5’s Ben Driscoll said, “I’m in favor of changing it, but I’m still learning more about it.”

How Queensbury sees it

Queensbury At-Large Supervisor Doug Beaty says, “There seems to be an imbalance…Let’s have a full vetting. This is too important to ignore…78% of the county’s population would be affected in a positive way if we changed it.”

Queensbury’s Brad Magowan said, “I think we can do something everyone will be happy with. I’m just not sure how we’re going to do it.”

Queensbury’s Matt Sokol said, “I think something needs to be done. These small towns are deserving of some money. It was set up many moons ago. Times change, and we need to look into it more.”

Johnsburg’s Andrea Hogan said, “I am in favor of taking a look at it. I truly see both sides.

I’m hearing that the perception is the needs of everyone in Warren County are not being met. The conversation didn’t come up because everyone is happy. But every formula I’ve seen, Johnsburg loses.”

Mr. Geraghty acknowledges, “If I was in a lakefront community, would I want a change? Absolutely not. But I’d ask them to come to Warrensburg and see how it is to run our budget…If we can do it a different way that would be more beneficial to all residents, I’m all for it. But I also understand people in the communities that get more sales tax revenue don’t want to change.”

Share
Previous Glens Falls VA clinic to double in size: 101 Ridge
Next What became of Solomon Northup after 12 years a slave