Tony got his tonsils out

It’s never fun to have a tonsillectomy — but when you’re an adult and your velvety crooner’s voice is how you make your living — well, that’s “something scary,” says Tony DeSare, the Hudson Falls Class of 1994 grad who tours nationally and internationally. The singer-pianist has two concerts upcoming in his hometown, complete with a Big Band, on Saturday and Sunday, Oct. 19-20.

During a phone interview about those gigs, Tony mentioned, “I got a cold in March, and something happened.

“It wouldn’t go away. I had an ongoing infection and a lot of pain, making it hard to sing.”

The medical decision? His tonsils had to go. Tony says now he’s been bothered with tonsil inflammation throughout his career.

He was operated on in late July, in California. (Tony and family now live in Atlanta; his parents recently moved there, too.)

“Of course, it’s a big deal for me,” Tony said of the tonsillectomy. “I ended up deciding on getting them out in Beverly Hills.” 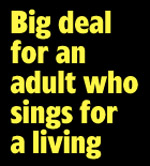 “My surgeon was Dr. Ryan Osborne in Beverly Hills. My ENT was Dr. Reena Gupta. Together they do a specialized tonsillectomy focused on singers.”

Tony said the surgeon had also operated on Frank Sinatra.

“They do the surgery at a very lowered temperature, and they also use a smaller intubation tube, so you don’t breach the vocal cords as much.”

“As part of the post-recovery,” Tony said, ”my laryngologist gave me special exercises to do. You normally wouldn’t, but I had to stretch my throat, sort of like yawning, so that it wouldn’t develop any scar tissue….

“The surgery was north of the vocal cords, but scar tissue can form and you can lose flexibility. It can change the voice.

“My voice does feel slightly different to me still. But overall, the doctor said I will most likely sound better because I will not be dealing with the constant inflammation I was having, for a long time.”

Still, he says, “It was a little worrisome.”

“The first two weeks after were really rough,” Tony says.

He took a full month off from touring. When The Chronicle spoke to him in late August, Tony was just then planning to take to the road for an intensive two-day gig at Indiana University.

By then, the healing was going well, but he was overcoming another cold he caught from his kindergarten-aged son, a bit of a setback, he said.

This week, he reports, “Yes, am back on the road and happy to report that voice is feeling better than ever. All went well.”

He said he’d just come from a follow-up appointment with his ENTs.

Share
Previous Beaty urges 8% sales tax; use it to cut school tax by 10%, add $$ for towns & Glens Falls
Next The late Nick Heald becomes a dad two years after