The late Nick Heald becomes a dad two years after

Nick Heald and Courtney Brosius were soulmates, inseparable South Glens Falls sweethearts who married on May 26, 2017.

But now Nick is a dad. Five weeks ago, at 1:18 a.m. on Wednesday, Aug. 14, Courtney gave birth to Ruby Mae, a dark-haired angel with a shock of black hair, Nick’s eyes and a family overflowing with joy after two years of overwhelming sorrow.

“It almost didn’t feel real at first,” Courtney told The Chronicle exclusively. “I’d look at Ruby and I was like, ‘Your dad is Nick!’

“It’s a unique situation…I was happy, but I’m also a first-time mom. I was really nervous before she was born. I didn’t set up the nursery until I had to!”

Courtney is an oncology nurse at Glens Falls Hospital. She and Nick started dating 10 years ago this month, juniors in high school. They were both 16. Nine months later, Nick was diagnosed with cancer.

Courtney says, “His aunt, Debbie Gurdo, is a nurse, and she asked Nick’s mom if he had thought about saving some of his sperm. But only one facility did that for minors, so his mom drove him to Albany, twice, before he had any kind of radiation or chemotherapy.”

The couple remained together as Courtney became an RN and Nick graduated from SUNY Adirondack and then Hudson Valley. The cancer came back, twice, even with clinical trials and new treatments. 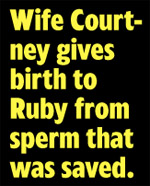 Courtney and Nick got engaged in November of 2016. They planned an October 2017 wedding, but moved the date up after Nick re-entered the hospital in March of that year. “It wasn’t good,” Courtney said.

They married in the South Granville Congregational Church. The reception was at 989 North in Queensbury.

“He knew he was dying,” Courtney said. “and we knew we wanted kids. He wanted three. I told him I was good with one. We talked about names.

“People ask if we picked Ruby’s name together. He liked Mallory, but I just thought of Ruby one day and liked it. And his birthstone is ruby, so it fits. Moms always win that argument,” she said, laughing.

After Nick took a turn for the worse, Courtney and Nick’s mom Amy Cosey Gurdo started looking into the process of using Nick’s sperm. “His mom had to do a lot of it,” says Courtney, “because he was a minor when it was frozen, and if he died and there was no document saying I could get and use the sperm, I would not be allowed to use it.

“So we called a lawyer, Tim Alden [also in South Glens Falls], and told him we had no idea what to do or where to turn. He looked into it and called me back and said he didn’t either, but he kept researching it and wrote up a contract that we all signed.”

‘Ruby was our fifth try’

“We started in April of 2017 when Nick was still alive. We did intrauterine insemination, or IUI, three times. Twice it didn’t work, but once it did and I had a miscarriage. I was pregnant at our wedding. I miscarried after nine weeks.

“Then Nick passed away, and I tried IVF (in vitro fertilization), where they take my eggs and fertilize them in a petri dish.

“I got all of the shots, and in April 2018 I got two embryos that made it to the genetic testing stage. One was a male and one was a female. They transferred the male in the spring and it didn’t take.

“I took the summer off, and then in December the female egg was transferred, and here’s Ruby!”

Courtney still has Nick’s sperm. Will she try again? “I don’t think so,” she said.

“They both are so in love with her,” Courtney said. “Nick was an only child.”

Courtney says her mom, Melissa Rayno, often talks about Nick’s ripples in the community, “and we still see them two years later. Everyone knows about her. We went to the Peppermill for dinner and our waitress was a neighbor and said, ‘Is this Ruby?’”

Courtney said she likes to walk around the neighborhood with Ruby and Finley, the dog she and Nick rescued six years ago.

“We were walking by this guy’s house and he came down to the end of the driveway and said he just wanted to meet Ruby! The first time I went to the pediatrician’s office, where I know no one, a nurse peeked around the corner and said, ‘Is this Ruby?’

“She brings happiness to people,” Courtney said, “and that’s what Nick did.”

After our interview with Courtney Heald, she sent a message, adding, “I’m hoping with this story we can pass along the message of sperm/egg banking when faced with a cancer diagnosis.

“We were lucky enough that Nick’s aunt, Debbie Gurdo, mentioned it. We wouldn’t have Ruby if it weren’t for her.”

Share
Previous Tony got his tonsils out
Next Glens Falls Hospital CEO: Why Albany Med pact is a win