Queensbury At-Large County Supervisor Doug Beaty has unveiled a proposal to raise the sales tax in Warren County from 7% to 8%, with a promise to use half the projected proceeds of $18-million to slash school tax bills by approximately 10 percent and provide the other half to all the county’s towns and the City of Glens Falls based on their population. 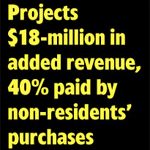 “The best part about it,” Mr. Beaty says, “is other people would fund the school tax reduction for all the residents.”

Mr. Beaty says, “40% of the funding of the school tax reduction is being paid for by out of town people visiting our great county” and making purchases that generate sales tax revenue.

Even with a sales tax rate of 8%, Mr. Beaty, says Warren County would “still be in the lower half” of tax rates in the state.

Mr. Beaty said he went before the county’s Legislative and Rules Committee to “provide the overview” and that he plans to “go before the full board in November.”

The always optimistic but frequently thwarted Mr. Beaty said, “Any supervisor who goes against this is, to me, hurting their residents. I think it’ll be a 20 to nothing vote. I think it’s a win for every resident in Warren County.”

Subsequent to his interview with The Chronicle Monday, Mr. Beaty emailed more detail about the school tax reduction.

He said “every district will get the estimated $1,000 per student” but that “the actual % reduced will depend on the amount/% of state aid the district received and the cost paid per student by the local tax payer.

“I would surmise that G.F. would probably get even more than a 10% reduction whereas B.L and L.G [Bolton Landing ;and Lake George] although still receiving the 1,000 per student receive less state aid and therefore the % would be lower than 10%. The 2 main factors in receiving state aid is student population and % of students receiving free lunches.”

He responds that “your two biggest expenses are food and shelter.”

He says, “Food is non-sales taxable; you go out to dinner that’s a whole other thing.”

As for shelter, he says the anticipated 10 percent cut in the school tax cost will benefit not just home-owners but also renters. He said landlords may pass along the savings or at least hold back rent increases. And if they don’t, says Mr. Beaty, other landlords will compete with lower rents.

Tenants “go where the lowest number is,” he says. “There will be downward economic pressure on all the landlords. It’s a huge freakin’ winner for the lowest income.”

He said the other initial pushback came from an official in a sparsely populated town not happy that the added municipal funding would be based on the population of permanent residents, not tourists or second-home owners.

Mr. Beaty says the law is the law as to the primacy of permanent residents, but that the town will gain from being more attractive to second-home owners paying less school tax and enjoying the “roads, clean water and clean air” that the county government assures. He anticipates they’ll make more taxable purchases.

In the more populated areas, Mr. Beaty says, for example, Glens Falls “Mayor Dan Hall will get a check for $1.8-million. Wouldn’t he like that?”

He said city and town officials could even use the money to help reduce residents’ county tax bills.

The Chronicle asked what assurance exists that the pledge would be kept as to how the sales tax money would be allocated.

“I’m gonna have all the safeguards in place before I ask for a vote by the board,” replied Mr. Beaty. “I have qualms about government doing the right thing. I won’t ask for it until all the i’s are dotted and the t’s are crossed.”

Mr. Beaty says that when he first told people he had a means to reduce everybody’s school tax payment by 10 percent and inject $9-million more into the coffers of Warren County’s towns and the City of Glens Falls, some people scoffed, “How you gonna do that, Magic Man?”

Now, he says, he’s convinced, “What I have proposed, along with Travis [Whitehead], is ground-breaking. We have worked the numbers, talked to professionals and are super confident we have a tax reduction plan that will help Warren County in many ways.”

Last fall, Mr. Beaty, a maverick Republican, sought election as chairman of the county Board of Supervisors. He expressed expectation of victory. In the end the only votes he received were his own and Glens Falls Ward 2 supervisor Peter McDevitt’s. Republican Ron Conover of Bolton was re-elected.