How many of you still remember Diane Struble?

In August 1958, the 25-year-old single mother of three young girls became the first person to swim the length of Lake George. It caused a sensation that drew thousands and landed her on national TV.

Nearly 60 years later, the Lake George Historical Association commemorates the feat with a new exhibit at its museum at 290 …

END_OF_DOCUMENT_TOKEN_TO_BE_REPLACED 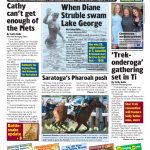 END_OF_DOCUMENT_TOKEN_TO_BE_REPLACED

Note: If you have ad-blocking software installed on your browser, you may not be able to view Chronicle promotions on this page. Don't miss out!