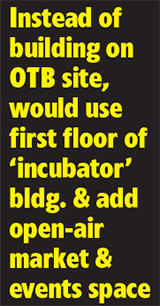 Faced with a price tag more than double what was projected, Glens Falls will drastically change its plan for a Farmers Market-multi use center on South Street.

Instead of the new enclosed building planned for the former OTB property, the market now will use the 5,000 square-foot first floor of what is popularly known as the Incubator building at 46 Elm Street and add a 5,000 square foot open, non-heated structure for use as an indoor-outdoor Farmers Market and multi use space.

The project is the centerpiece of Glens Falls’s plans for the $10-million state Downtown Revitalization Initiative (DRI) grants awarded by the Cuomo administration.

Mr. Flagg attributes the price rise to supply chain and inflation issues, plus new state energy efficiency regulations that he said add significantly to the cost.

The DRI plan for South Street also involves the former Hotshots building on the corner of South and Elm and property across the street including the city parking lot and current Farmers Market.

Preferred developer Sonny Bonacio of Saratoga Springs is considering — on the city parking lot in-between the former Sandy’s Clam Bar building and New Way Lunch — two multi-use buildings, including potentially a five-story apartment building with as many as 90 one- and 2-bedroom units, Mr. Flagg said.

Mr. Bonacio had not returned a phone call by Tuesday press-time.

Mr. Flagg said Glens Falls continues to negotiate with Bonacio Construction to buy and renovate the Hotshots and Incubator buildings as part of the overall public-private DRI project.

Mr. Flagg said the city is now thinking to possibly build a parking garage in its current Elm Street lot adjacent to Downtown City Tavern instead of at the current farmer’s market site on South Street. He said that garage plan hinged somewhat on including Glens Falls National Bank’s adjacent parking lot.

To date, Glens Falls says it has realized about $500,000 in reimbursement from the $10 million DRI grant — for Mr. Bonacio’s 14 Hudson that houses apartments and SUNY Adirondack Culinary.