After a year of preparation, Matt Funiciello’s Rock Hill Bakehouse Cafe reopens this week at 18 Curran Lane in Glens Falls behind and next-door to the Shirt Factory. Both buildings are owned by Eric Unkauf. 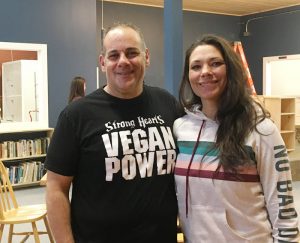 Owner Matt Funiciello, with his life partner and production manager Amber Lannutti, standing in the cafe, with a window view to the bakery’s hearth oven. Photo/Cathy DeDe

The bakery moved from its long-time home in a shopping plaza in Moreau north of Northway Exit 17.

The cafe is the successor to Mr. Funiciello’s original cafe on Exchange Street, which continues to operate as The Exchange Street Cafe under new owners Sara and Chris Patten.

They planned to move the bakery on Tuesday, their no-baking day, and open the cafe and retail on Wednesday, Jan. 15.

Mr. Funiciello said they’ll start right away selling breads, biscotti, coffee and pastries, with the full cafe menu likely to begin in a couple of weeks.

Hours will be Monday to Wednesday from 8 a.m. to 6 p.m., to 9 p.m. Thursday to Saturday, closed on Sundays to start. Mr. Funiciello said they’ll add Sunday hours once the cafe gets going.

Breakfast, lunch and dinner will be limited to plant-based, all-vegan, from breads and pastries to tofu-based quiches, tofu scrambles, signature hearth-fired pizzas, soups, salads, sandwiches, chili, Indian-style dal and curries, and some gluten free (though not Celiac-safe) breads and more. 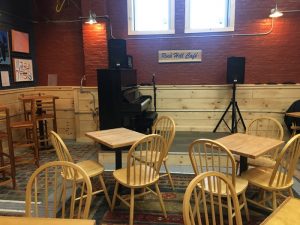 Prepared, take-out and frozen items such as pizza dough, soups and lasagne will be available as well.

There’s a viewing window from the cafe into the bakery. Mr. Funiciello said he aims to add baking classes and facility tours.

The project was originally expected to take just a few months, rather than eight. Mr. Funiciello said converting the former World War II-era Nabisco warehouse, most recently used for storage of large machinery and artifacts from the Shirt Factory, was a “herculean” process.

The dark and dusty industrial space has been converted with added windows, high ceilings and efficiently designed spaces for the dual bakery-cafe There’s a newly refurbished gas-fueled hearth oven — with plans to add a second, electric, potentially solar-powered oven as finances allow.

Mr. Funiciello said several elements, from the front doors, cooler and storage racks were scavenged from demolition of the recently replaced Exit 18 Stewart’s.

There will be 27 staff members altogether, fewer than when he ran the separate bakery and cafe, Mr. Funiciello notes.

“The real story here is a business going to all-vegan,” he said. “Maybe that will inspire other businesses that they can do this too.”

“People may say it’s crazy and naive,” Mr. Funiciello says of his business plan. “Well, I am crazy, but I’m not naive.”

He says he transitioned his own diet and his food business to all plant-based, “because of global warming.”

“I loved meat. I was a butcher when I was young,” he says. “But I also had had a detachment from animals and that has also changed with this.”

He says sourcing materials “responsibly,” including the million pounds of wheat he says he purchases annually, is a priority.

Mr. Funiciello says he pays all employees a self-imposed minimum $15 hourly wage, “and no one is paid more than $17.50 an hour, myself included.”

Cafe tips will go into a communal jar, to be distributed to all employees, from the bakery to counter servers, based on hours worked, he notes.

They are using disposable, compostable dishes, he said — adding that he has yet to find a composing entity that will take the used materials. — Cathy DeDe