By Gordon Woodworth, Chronicle News Editor
Neighborhood ground water issues have been raised by foes of …

Neighborhood ground water issues have been raised by foes of the Warren-Washington Association for Mental Health’s plan to put 28 apartments of affordable permanent supportive housing for homeless and mentally ill individuals at 47-50 Cooper Street.

“A sketch plan” conference about the project is set for the Glens Falls Planning Board on Tuesday, April 2, at 4:45 p.m. in the second-floor Common Council chambers. “This presentation is for information only. No formal action will be taken,” the agenda says. 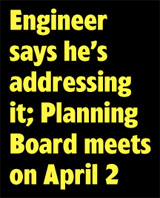 The meeting comes less than two weeks after a community forum where several neighbors raised concerns that existing water issues will be made worse with the apartments. Several elected officials also balked at another not-for-profit (i.e. tax-exempt entity) locating services in Ward 1.

Nancy Underwood said she lives on Leonard Street, east of the proposed site.

“I have had water in my basement multiple times, and I know of several houses around us that have had to seal their basements,” she said. “And every time it rains, sewage backs up into my tub in the basement. There are already real infrastructure issues.”

A woman who didn’t give her name said she’s gone through several sump pumps because of water in her basement.

Mrs. Underwood, who is running against Jack Diamond for Ward 1 county supervisor, told The Chronicle Tuesday, “I have been knocking on a ton of doors in that neighborhood, urging people to go to the Planning Board meeting to make sure their voices are heard. I have not talked to one person in that neighborhood who wants it.”

Mr. Diamond also opposes the site. He has urged WWAMH to sell it to Elizabeth Miller to expand Miller Mechanical.

John Farrell, WWAMH’s director of facilities, says he was aware of runoff issues because Mayor Dan Hall mentioned them earlier this year. At the community forum, engineer Tom Jarrett said he designed the site to mitigate stormwater runoff issues.

“Any water on the site we are going to push toward the sewer line on Cooper Street,” Mr. Farrell said Tuesday.

WWAMH: We’re set on this site

The Mental Health Association’s Andrea Deepe said they are committed to the Cooper Street site, and that $5.2-million in state funding is tied to that location.

Mr. Farrell said Tuesday that he had spoken to state officials about the possibility of looking at another site, “and I was told we would be ill-advised to even consider moving elsewhere.”

Councilwoman-at-Large Jane Reid, speaking at the community forum, told residents that “the Common Council is just as concerned as you are” about the abundance of not-for-profits in the City.

“But we have no ability to prevent them from coming to us. And this is the first time a non-profit has sat at the table and said they would discuss a PILOT. We are extremely grateful for that, and hope it sets a precedent and set a different tone going forward.”

Mayor Hall, contacted for comment, said issues raised at the community forum “will be evaluated and considered by the Planning Board.” He said many non-profits end up in Ward 1 because it contains 95% of the land in the city zoned Light Industrial. “That’s why they go there, because it’s an allowable use in Light Industrial zones.

Mrs. Underwood said, “Just because we have a different opinion doesn’t mean we don’t care about the homeless. We just would like to see it done in a way that’s fair to everyone, including the neighbors.”