By Jason Irwin, Chronicle Freelance
You may have noticed some new activity on South Street recently …

You may have noticed some new activity on South Street recently in the form of the all-new Studio 58 Cocktail Lounge and Beer Garden. The location is 58 South Street, formerly the Irish Pub, which closed in 2015, and the short-lived “58 Bar and Grill,” in 2017 and early 2018. 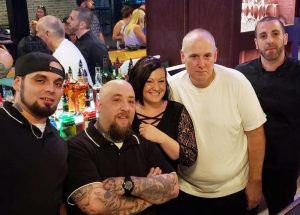 Studio 58 is owned by former Golden Eagles baseball team owner Darin Williams, and operated by partners Jesse Smith and Steve Hoffman. They signed the lease in September of last year, and put their efforts into it full-steam ever since.

The trio celebrated their “soft opening” on Sept. 11 to a sold out crowd (the capacity is about 100.) Mr. Williams was happy about that. “We had to turn people away.”

Operations Manager Mr. Smith is a 38-year-old Long Island transplant who has an extensive background in the bar business. He spent 18 years with Regency Hotels as a traveling bar manager.

After a deal fell through last year that would have turned the former Daily Double bar into “Bottom Rockers,” he set his sights across the street on 58 South.

“My goal has always been to open a place with a nice, clean, friendly atmosphere — and this is it,” Mr. Smith said.

There were some initial hurdles to overcome involving the liquor license — which isn’t easy to get these days.

“After that came though, the place started moving along fast,” he said.

I’ve been in the place —it’s nice. There’s been a lot of remodeling, including new woodwork and bathrooms, refinished bar, updated lighting, new furniture, new televisions and even a new stage. A great patio out back allows for some additional capacity and outdoor socializing.

“We’re trying to do something a little different,” says Mr. Smith. “Our craft drinks have fresh herbs and fruit — they’re not your typical find around here.”

They’ve had a pretty steady flow of customers, from my observations. (I’ve been known to roam those parts a little.)

They have now received their entertainment license, which is issued by the City of Glens Falls and will allow the establishment to host music events and more.

Food will also be an emphasis. “We’ll be doing a full lunch and dinner menu, not just bar snacks,” says Mr. Hoffman, a 36-year-old Brooklynite, who was the sous chef at the Queensbury Hotel and Fenimore’s until just recently.

He said he is excited to showcase his own culinary style in his own domain.

“I’ll be doing daily specials, and much of this you won’t find anywhere else around here. We have smokers — I’ll be smoking wings and other meats, doing a prime rib entrée and a nice steak. I want a nice mac and cheese, good appetizers — and fun thing with desserts like deep-fried ice cream,” Mr. Hoffman said.

He said he plans to have lunch and dinner available from 11 a.m. until 9 p.m. Down the road he’d like to cater as well.

“We’re with the whole new movement for South Street. We, along with Craft on 9, are the first ones to open up since the new plans for the street were announced and put into motion. We’re ready for it.”

“We get along with the people at all the local businesses,” he said.