By Mark Frost, Chronicle Editor
The BBC reported last week on a study that found heart …

The BBC reported last week on a study that found heart attack survivors who have dogs live significantly longer than those who don’t. It postulated that dog owners walk more, thus improving their health. 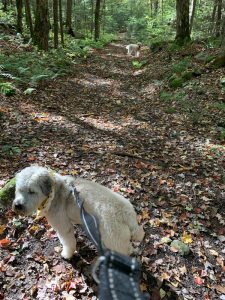 Zoe, off-leash in the distance, making sure sister Maggie and parents Mark and Sandy are keeping up. Photo/Mark Frost

I — and any dog owner — can tell you it’s true but only part of the reason. Dogs make you feel better across the board. Who doesn’t benefit from a friend who’s ecstatic every single time you walk in the house?

We’re prizing our two dogs more now than ever because Zoe, who’s now 11 1/2, is having health problems that the her doggie dermatologist confided have been bad enough that some dogs get put to sleep.

We realize we’re in a fortunate position to be able to afford having Zoe treated by a specialist whose route includes Albany.

Wheaten terriers are fabulous dogs, but they’re given to skin problems. The high-powered drugs the dermatologist prescribed have worked wonders, though Zoe battles other issues like arthritis. I carry her up the stairs to our bed now.

But she’s such a trouper. Ask “Go for a walk?” and Zoe leaps off the floor like a two-year-old. Going for a walk (or hike) orfor a ride are Zoe’s and Maggie’s (and most dogs’) ultimate joys in life —being included.

Several weeks ago, our family of four (Sandy, the dogs and I) found ourselves on a Saturday afternoon drive east of Schroon Lake loving the gorgeous autumn day. We saw a trailhead and ventured out.

We always keep our pooches on leashes, but somewhere along the way, Sandy said, let’s take Zoe’s off.

We would never dare do that with impulsive Maggie, who’s nearly seven. Long-time Chronicle readers may recall six years ago when Maggie, as a four-month-old, was spooked by thunder and fled into the woods. She was missing for two days, feared lost forever. Then she emerged safe in a backyard on the next street. Ecstasy! (Maggie is terrified of thunder now, always retreats to close-in spaces when it booms.)

Anyway, Zoe is much more a home-body. But still, leash off in the woods, how would it go? It went great. She was loving her freedom, walking jauntily ahead of us, then looking back, as she does when on leash, to make sure we were keeping up.

My highlight is when I manage to get her to take her giant liquid-filled prescribed capsule that is the size of a small swimming pool.

Dog owners know that you have to disguise it, hide it inside food so they won’t notice. Hard to do that when you’re trying to get her to swallow a virtual football.

Everybody has advice. Use “pill pockets.” Zoe wants no part of them. Employ liverwurst. She doesn’t like it anymore than I do.

Cheese? It worked for a short while. But once Zoe isolates the capsule in the middle with her tongue, she drops it straight on the floor and then never falls for the ruse with that food again.

Turkey breast worked for a while, then she figured that out, too.

When Sandy was away in England for a week, the pressure on me was intense. Any day that I could get Zoe to swallow her pills relatively easily was a great day for my health! Pressure off. Pride of achievement.

Sandy’s latest — and hugely successful — vehicle has been frozen chicken meatballs warmed up (but not too warm) in the microwave. We don’t typically feed Zoe chicken, but desperate times call for desperate measures.

Zoe loves meat. Dogs love meat. I wonder what will happen once the climate change police force us all to go vegan. You may get away with that on humans, but I can tell you canines will fight it like protesters demanding democratic rights in Hong Kong.

It’s 9:30 on Tuesday night as I write this column. In an hour or so we’ll transmit the issue to our printing company.

I’ll get to go home, have some dinner and hopefully catch some innings of Game 6 of the World Series. But the real treat awaiting me is knowing that Sandy will have fed Zobo her giant pill so I don’t have to!

Back to the original point: Whoever first took the chance of bringing a wolf into the house, and succeeded in making it a pet, scored one of the greatest achievements for the human race.

I didn’t understand until I had dogs how totally they are a member of the family. Best friends, yes, but your kids too.

Yes, after a heart attack or any other onset of illness or distress, for me the best prescription should definitely include good, ongoing doses of dog!