It’s been a challenging year for Brodie and Reece Lanoir, as well as for their mom Ann, after their dad Adam Lanoir died suddenly in October 2018 at the age of 42.

Adam, a hockey player from the age of three, played on two state championship teams for Glens Falls High School, and was a coach and good-will ambassador for the Adirondack Youth Hockey Association, as well as working as a lineman for National Grid.

Adam’s death was crushing to the local hockey community. Hundreds of mourners packed St. Mary’s Church for his funeral. A GoFundMe page raised thousands of dollars to help with expenses for Ann, server extraordinaire at Poopie’s restaurant, owned by her parents Jerry and Brenda DiManno.

“We have had a lot of friends helping us out,” Ann said. “Our hockey family is so great. Hockey families are the best families. I couldn’t do it without them.”

Brodie and Reece are crazy for hockey as their dad was, which set the stage for a magical two-day road trip to New Jersey, where they skated with Devils hockey star Jack Hughes. 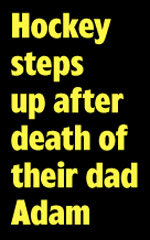 “To see Reece and Brodie skating and playing stick and puck with Jack Hughes, smiling ear to ear, was so awesome,” said Ann.

She took Brodie and Reece out of school a little early on Tuesday, Dec. 3, telling them they were going to see the Rockettes
perform. They were joined by Dylan Pasco, one of Adam’s best friends who helps Ann and the boys now.

The boys knew something was up.

“Whenever you take us out of school, it’s for a hockey game,” Brodie said. “It wasn’t hard to figure out.”

They went to the Devils game that night against the Vegas Golden Knights and got the VIP treatment with full access to an exclusive restaurant high above center ice.

The boys went down to ice level to try to get a puck during warm-ups when Dylan told them if they behaved, they might get something a lot cooler than a used puck.

They stayed in a hotel that night, and the next morning went back to the Prudential Center, where team officials escorted them into the locker room.

There sat Jack Hughes, the 18-year-old phenom and #1 overall draft pick in this year’s NHL draft.

“Hey guys!” Jack said as Brodie and Reece walked in, wide-eyed and smiling.

There was a Jack Hughes jersey for each boy hanging on a locker, along with a couple of Jack’s sticks, new skates, pads, gloves, helmets and bags, all gifts from Bauer, the hockey outfitter.

“And then the Devils gave them a bag full of swag, shirts and sweatshirts,” Ann said.

The boys laced up the skates and Jack taught them how to tape a stick, advising them to use white tape.

Out they went onto the ice, where they played stick and puck with the NHL star, laughing and smiling.

“The best part was just meeting Jack and being able to skate with him,” Brodie said.

Ann said they were told Jack would spend about 30 minutes with the boys. They ended up hanging out for nearly three hours.

“Everyone was so incredibly nice,” Ann said. “It was so special.”

In a Bauer video posted on social media, Jack said, “They obviously went through something really tough as a family. I had the ability to give them a really special experience. We’re in a position to kind of help people out. We can be leaders and role models in the community.

“I’m glad we could make them smile and I think they had a lot of fun.”

Bauer’s ‘The Game Is A Gift’ project

The New Jersey visit came about because someone that Adam played men’s league hockey with knew a guy on another team who worked for Bauer, the hockey equipment company. 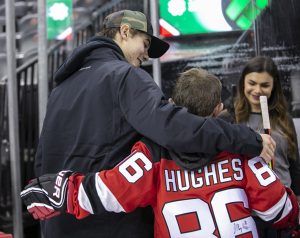 That guy knew of Bauer’s new program called “The Game is a Gift,” which pairs NHL stars using Bauer equipment with kids who have endured some hardship.

The Lanoirs plan to go back to New Jersey to see the Brodie’s Boston Bruins play the Devils. “Jack said he couldn’t wait to see Brodie wear his jersey when they play the Bruins,” Dylan said.