Donates kidney to save her step-son

The 1993 Queensbury High School graduate was living in Seattle, working for a health insurance company, when he started getting headaches in the summer of 2015. “In September and October I was run down,” he said, “and in late November, I started getting swelling in my lower legs and blood in my urine.”

Right before Christmas, his condition worsened. Mike went to the University of Washington Medical Center, where he was diagnosed with hypertension caused by kidney damage.

“I was in end-stage renal disease,” he said. “I started dialysis the next day.”

He received dialysis three times a week, starting on Christmas Eve in 2015, until Sept. 24, 2019, when he received a new kidney, thanks to his stepmother Debbie Dawe-Benway.

Mike’s dad Bob had wanted to donate a kidney but couldn’t because he was on high blood pressure medication.

Debbie wasn’t a match for her stepson, but she was healthy and willing to donate one of her two kidneys to another end-stage patient waiting for a transplant.

“It’s called a chain donation,” Debbie said. “I thought, if it will help Mike get a new kidney, I’m all for it!”

By donating a kidney to another patient, Debbie opened Mike up to new pool of potential kidney donors. It didn’t vault him to the front of the line, but “it made me more of a priority. They still had to find a perfect match.” 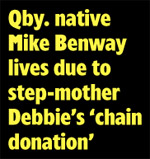 “And within six weeks Mike had a donor,” she said. His donated kidney would come from a donor who, like Debbie, had a loved one who was in end-stage kidney failure.

On Sept. 25, 2018, Debbie donated a kidney to a 63-year-old woman named Donna who lives in Olympia, Washington.

Bob said, “Mike was in such poor physical condition that they almost didn’t do the transplant.”

Mike said, “I was going downhill. It was emotionally overwhelming. Just a beautiful experience. I can’t say enough good things about it.

“It brought us all closer together.”

Debbie said, “I am filled with overwhelming pride to be able to do this, and I’m grateful that I was healthy enough to do it.”

Bob, his voice choked with emotion, said, “Deb gave him his life back.”

Mike, who was home in Queensbury for Christmas, said he feels “1,000% better. I have a tremendous appreciation for life. I see the value in everything. Little things don’t bug me. Food tastes better.”

Debbie said she feels great, and is excited to meet her recipient Donna next year.

Bob said, “There is such a need for kidneys. The need far outweighs the number of donors. Even if this story inspires one person to look into this, it will be worth it.”