Three members of Queensbury’s Valenza family are National Guard members now headed to the Middle East as part of the 42nd Infantry Division’s deployment. A fourth family member is already there.

Major Julie Valenza, her husband Sergeant First Class Will Valenza and their youngest son Andrew, 21, shipped out Saturday for their training at Fort Hood (Texas) before deploying to the Middle East.

Older son First Lieutenant Mitchell Valenza, 24, is already in Afghanistan serving as a platoon leader and infantry officer. He graduated from West Point in 2018 and from Army Ranger School in 2019.

That leaves only Camille, 22, at home. The 2019 Siena College graduate is a second lieutenant and field artillery officer with the New York Army National Guard. She works for the National Guard in Latham, and her responsibilities now include caring for the Valenzas’ family home and their aging beagle Sally. 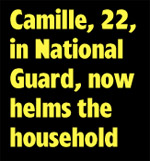 “I’m happy to do it,” Camille said Monday. “It is what it is. I get to live in the house for another year. I’m good with that.”

She said after her parents and Andrew shipped out Saturday, “I was very productive. I did laundry. I did the dishes. I cleaned up. Everyone was calling and text ing me, asking how I was doing, and I was like, ‘I’m fine!’”

Camille’s mom Julie has deployed before. This time, she said, is different.

“First, it’s difficult,” she told The Chronicle by e-mail. “Difficult to wrap up all the loose ends and pass the torch to another person to take over for mom and dad running a household. It’s been a challenge for me to get organized to keep things as simple as possible for her.

“I would have to say that it is ‘less difficult’ (?) in some respects than going on my own. When I left before, Will was home with three teenagers having to be everything for them, all while dealing with his own emotions of us being apart.

“Camille is actually perfect for this role because she is so independent, organized and capable!!! The hardest part though, is saying goodbye. With my first deployment I learned that — I don’t mind going anywhere, I just hate to leave.”

Will Valenza, a former Glens Falls Police Chief, followed his wife into the military, enlisting in 2009.

He says, “I think it’s a lot easier for us since we are all going together. We watched so many soldiers saying goodbye to spouses and small children today. Fortunately our daughter is older and can take care of the home and dog but it was still tough to say goodbye for a year.”

Retired National Guard recruiter Arthur Coon said, “When I enlisted SFC Will Valenza in August of 2009, I certainly could not have predicted that the whole family would end up enlisting! But after you get to know them a bit, it really comes as no surprise that their family would live a life of service.

“One of the Army values is selfless service, and usually you think of that with an individual soldier, especially these days with the percentage in society who choose to serve being low.

“But with the entire Valenza family serving, I guess you’d have to broaden your idea of selfless service to include a whole family who serves their country and community!”

Julie admits being a mom and deploying with two of her children is “different. Honestly, though, they have been going away since they were 17; to basic training, West Point, colleges and summer trainings, that I’m kind of used to it. It’s part of our lifestyle now. The worry factor is always there regardless of who or how many are away.”

Will says about his whole family being in the military, “It’s great. I’m glad they decided to serve and I didn’t have to pay for college. All three graduated from college with zero student debt and got paid to be there. I’m really proud of the choices that they made.”

Camille is embracing the challenge of keeping the home fires burning, aided by a slew of friends and family.

“Everyone has been great,” she said. “It’s nice to have those types of people around you. I’m fine. I don’t want mom and dad to worry about the house or anything.”