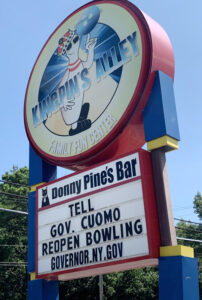 “We’re open, so that’s optimistic as it is,” he told The Chronicle Tuesday. “We’ll see.”

“I had a real good day here yesterday,” he said. “We were busy all day. They wore their masks and people had fun.”

They can operate at 50 percent capacity and “one of the things that’s in the guidance that the state published on Sunday, you have to have every other lane closed — unless you put up an acceptable physical barrier between lanes.”

“I know some of the proprietors are doing it and contemplating doing it,” he said of erecting physical barriers. He said some are using sheets of plastic, some are even using “shower curtains.”

As to the outlook for the fall, he said, “There’s still a lot of confusion about the leagues as far as the every other lane thing. We are expecting a drop-off in numbers unfortunately.” He said some “bowlers don’t want to bowl with a mask, some are a little leery about Covid.”

He said, “We need for the bowlers to understand that these are not our rules, not our regulations, it’s the state.”

While the bowling owners pushed hard to overcome state resistance, Mr. Bohannon also says, “I think the Governor’s doing a pretty good job of getting us where we are — nine days in a row below one percent positive rate [on COVID-19 diagnoses.]

“Whatever we’re doing it’s working. I’m optimistic they will stay where they are. If the numbers keep going like this, I can see the regulations and restrictions being loosened up. It’s hopefully a temporary thing and we’ll get through this.”

“We were kind of lucky,” Mr. Bohannon notes. “We were shut down during the summer, which is typically slow for bowling. If it happens again during the winter months, it’s gonna shut down bowling alleys across the state” — especially if it’s “another shutdown like we had, five months.”

His message to bowlers is, “We need for them to come back and support us and support small businesses across the state.”

Mr. Bohannon is also president of the New York State Proprietors Association. Asked how he’s enjoying it, he laughed, “I jumped out of the frying pan right into the fire on this one,” then added, “I don’t mind it. I’m kind of enjoying trying to help everybody. We’re all a big family in the bowling business. A lot of us know each other from all over the country. I like helping people.”

The Chronicle was unable on Tuesday to reach Brandon and Sean Bickford, who own Broadway Bowl in Fort Edward and Slate Valley Lanes in Granville.