Tense rally but some common ground?

A “Defund the Police” rally led by a self-described socialist Monday in City Park drew a larger crowd of angry pro-police protestors, but ended with a glimmer of mutual respect. “We had great conversations at the end, after things got quiet. That’s called building bridges and it is what happened. It is beautiful,” Mike Kibling of South Glens Falls told The Chronicle Tuesday morning.

Mr. Kibling was not exactly building bridges during the rally itself. He was one of three counter-protestors wielding a bullhorn. At its most civil, Mr. Kibling called out, “Hey, if you really want this why don’t you come to City Council meetings and ask the mayor for it,” and “What did the Glens Falls Police Department do that you want to defund them?”

But he also led those who aimed to drown out the “defund the police” speakers with chants of “USA,” “blah blah blah,” “How are you going to occupy anything you dumbass,” “Stick the demands down your pants and wipe your ass with them,” “This is our city not your city” and more.

Led by Glens Falls resident Wayne Denton, about a dozen people turned out in favor of the “Defund the Glens Falls Police” rally that started at 3:30 p.m.

From the bandstand, Mr. Denton told the crowd, “We are not here because of other movements going on. We are here to educate the citizens of the greater Glens Falls area, who are overpoliced in a small city.…

“The same could be said of Hudson Falls, Fort Edward, South Glens Falls, Saratoga Springs and any other small municipality with its own police force.”

Mr. Denton said, “The police are not providing the service people are fantasizing about.” He said, “Police are managing and even producing inequality, managing the behavior of those on the losing end of the economic agreement.”

“I think it is important and responsible to have this discussion in public and not in a back room of City Hall.”

There were 30 boisterous counter protestors, waving flags, taunting and shouting down the rally organizers.

Eight to 10 Glens Falls police officers separated the groups. More police surrounded the park and were outside City Hall, which the defunding group had planned to “occupy” as part of their rally.

That did not happen, as City Hall was closed early for the day and barricades erected.

The Chronicle spoke with rally organizer Wayne Denton by phone after the event.

He said he is a 2009 South Glens Falls High School graduate who teaches 7th grade Social Studies in Schenectady.

“I am lucky because I have an administration that encourages us to get out and speak up,” he said. “I myself have always been an activist. I am studying for my PhD. Economic History and public budgets have always been something I’ve looked at.”

He said he’s owned a home in Glens Falls for five years. His rally co-organizers were Kristen Wadleigh, a Glens Falls grad and current resident, and Tara Dee, a Queensbury grad who lives in Hudson Falls.

Mr. Denton characterized them as “three friends” not affiliated with any movement, group or political party.

He self describes as a socialist. “I am not a Democrat,” he said.

Of the rally, he said, “The goal of today was to educate people. We know a rally like today may not be the best option to reach people. We did show that the idea of an emotional attachment to the Police Department is real.

“People don’t want to talk about things that may not add up. Not everybody was going to change their position.

“But we did make a lot of contacts today. We plan on building a movement to have our voice heard in City Council meetings.”

Asked about the rally language calling for defunding the police, Mr. Denton said, “Demand is a strong word. It’s a psychological thing rather than just saying ‘we would like this.’”

Mr. Denton said, “Police are always going to be part of our lives. ‘Abolish’ is not accurate, but what percentage of our budget should be allocated there?”

Why use such words, then? Mr. Denton said, “I think it is necessary. The emotions wrapped up in a Police Department, to try and get the factual part of it out.”

He said the counter protestors “tried not to let us get a word out. There were no reasonable arguments coming from that side. It shows there is an emotional, but maybe not a statistical based attachment to the police department.”

Mr. Denton said he requested Glens Falls police budgets and statistics for 2019 via the Freedom of Information Law.

“We are not anti police,” Mr. Denton insisted. “We like our police officers.”

He said his research showed there was not a trend of racism among officers.

He said he divided police activity into five categories — “warrants and bail violations or logistical work, substance abuse, mental health, poverty-related such as petit larceny, and violent crime” — and found “only 6.5 percent of their work is on violent crime. I spoke with one officer and said, why should the police have to handle every single situation, like a mental breakdown, that you are not a professional in?”

Mr. Denton said arrests of black people are 575 percent disproportionate to their presence in Glens Falls.

“The cost of the police department is robbing the vitality of this area,” he said.

“At a time of pandemic, the region is facing an epidemic of addiction. Our leaders have chosen to rely on private charities, non-profits and criminalization of addiction. Why not move our allocation of funds from criminalizing into curing addiction?”

Mr. Denton called in his speech for “abolishing” the police but he gave them credit for the job they did on Monday.

“During the rally,” he said, “the officers protected both parties’ First Amendment rights. They showed no bias. I went around personally afterward and thanked them.” 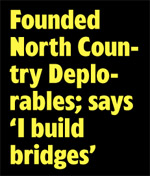 The counter-protestor Mike Kibling was a founder of the North Country Deplorables, but says he disbanded the group and calls himself an independent activist.

Despite his notably harsh words during the event, Mr. Kibling told The Chronicle the next morning, “I was happy with the discourse.” He maintains, “I went there to build bridges and that’s what we did. I’m a Jesus-loving guy.”

“I addressed some of those people who were yelling, saying you’re making us look bad,” Mr. Kibling said.

He said of Mr. Denton, “It’s ballsy of him, to stick his neck out.”

But Mr. Kibling acknowledges, “I did want to drown out their message. Who he had there, these were kids he was influencing.”

He said he takes issue with the organizers’ list of demands. “Not defunding police,” he said. “They want ’em gone.”

Mr. Kibling said, “Even if we don’t have the problems of other cities, it creates anxiety. You see ‘Black Lives Matter’ and you think, Oh my God, Antifa. Then we are all locked down on COVID 19. So, people vent. Yesterday was like that, people venting, blowing off steam.”

Mr. Kibling said, “Once we found peaceful ground, we could talk. It’s more ‘We the People,’ looking for reform.”

“What they’re doing, I think, is like an auctioneer. Ask for everything and hope you get some of it. Reforming the police, training more on de-escalation, that is important. But you can’t have reform without funding.”

Mr. Kibling said, “Should you have a social worker rather than an armed police officer for a domestic issue? There are also times the police get called for stupid things.

“I know a lot of law enforcement officers. I see the heartbreak and hear it in their voices when they go through Hudson Falls, Fort Edward, and people flip them off or say foul things to them.

“People are making their jobs very difficult, and then, asking for defunding? I don’t know what our country would be like without police, but it looks bad to me.”

Mr. Kibling said, he and some like-minded activists aim to raise funds to help purchase a virtual reality training system that Glens Falls Police and other departments could use, for free.

“We don’t have the problems they have in Portland or other big cities. We are in a great position to move forward, to be a model where people say, Look at what they did in Glens Falls.”

Mr. Kibling said his understanding is Sheriff’s officers earn more than Glens Falls Police, “so those offers were smiling behind their masks.”

He said Glens Falls needs its police department. “There are private business owners investing into Glens Falls. We have the Park Theater, they want to entice doctors with nice bistros and local dining, quality of life. We need the City Police more than ever.”

He said he was surprised to see Black Lives Matter activists from Albany — invited guest speakers — show up for the City Hall portion of the rally.

“That’s not what we were there for. I am a political activist. I don’t have a problem with Black Lives Matter. In fact when I talked to them later and they realized what this was really about, they were out of here.”

At other rallies, he says, “I’m the guy crossed the line. When I hear talk of Civil War and fighting, it sends chills up my spine. We are all still Americans. If you had a 90-day shut down of the media, watch: Everybody would be in the street together singing ‘Kumbaya.’”

Mr. Kibling added, “I am a Trump supporter but I don’t watch Fox News. Tucker Carlson, he looks into the camera and it looks like he’s trying to hypnotize you. My wife does not like Trump. She’s a liberal. Sometimes I wish she had a mustache so I could punch her in the nose.”

By Mark Frost, Chronicle Editor It was one day, not an overnight. It was at …