Assistant DA: I’m absolutely not giving into the disease MS

“I like four-and-a-half inch heels, and a woman in one of our grand juries commented on them in court the other day. 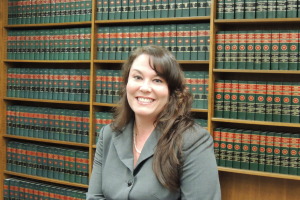 “I told her I have Multiple Sclerosis, and that I will wear these heels until this disease takes them away from me. MS has nothing on me.”

And Ms. Davenport, 34, is battling to keep it that way.

Diagnosed with MS six years ago after experiencing partial paralysis while in her second year at Vermont Law School, she has worked in the Warren County District Attorney’s office for more than seven years.

“I’m a fighter,” she says. “That’s why I’m a prosecutor. I’m not giving into this. Absolutely not.”

Ms. Davenport’s boss, District Attorney Kate Hogan, says, “Emilee is not just living with the disease but thriving despite the disease.”

“I love it,” she says. “It’s a great way to relieve stress. You have to think strong to be strong. And I feel like the workouts are slowing down the disease process and making me stronger and more agile.”

She also hikes, bikes, swims and loves to kayak.

A native of Stevensville, Montana, who graduated from Montana State-Bozeman, Ms. Davenport was in her second year at Vermont Law School in 2004 when she first showed symptoms of MS.

“My right side gave out as I was trying to get out of the tub,” she says. “And the symptoms progressed very quickly. I couldn’t put my right hand in my pocket the next day.

“And the day after that, there was a clear divide through the middle of my body, from my chin to my waist. I was becoming paralyzed.”

She went to her doctor. “He told me, ‘If you weren’t so stable, I wouldn’t have believed what you are telling me.’”

He sent her to Dartmouth-Hitchcock Medical Center in Hanover, N.H., where an MRI indicated a mass inside the top of her spine.

“The mass was expanding and pressing on the nerves,” Ms. Davenport says. After a dose of high-powered steroids, “I was mobile again in a week.”

The mass kept shrinking, but the tests continued. She was diagnosed with acute transverse myelitis, or inflammation of the spinal cord.

She was also symptomatic of MS.

“My doctor, who was the head of neurology at Dartmouth-Hitchcock, said, ‘It’s not cancer, but it might be MS.’

“I was devastated, but the doctor grabbed my hand and said, ‘It’s better than the alternative.’”

“I graduated at the top of my class, was on law review, and then moved to Skaneateles to live with my Mom and study for the bar exam,” she says.

Ms. Davenport started her job with the Warren County District Attorney’s office in 2006. She was still dealing with neuropathic pain in her right arm when she had another episode.

“I was in Bridal Boot Camp at the Y, and was doing lunges, and I started listing to the side,” she says. “My right side was going again. I could feel the weakness.”

This time, though, it wasn’t the mass on her spine.

“I had developed lesions on my brain,” she says. “I only have eight. Other MS patients have hundreds. I’m very lucky.”

But, she now officially had MS.

“There’s no cure, and we don’t know what causes it,” she says. “It often affects females in their late 20s who are born and raised in northern climates.

“It’s not hereditary. No one in my family has it, and if I have children, I won’t be passing it to them.”

Ms. Davenport now gives herself intra-muscular injections of Avonex once a week. The drug brings with it flu-like symptoms.

It may soon be available in pill form.

“I would love that,” she says. “I definitely believe in the treatment, and I haven’t developed any further lesions. I’m not presenting any symptoms. I just have some pain in my right arm from nerve damage, and I do have muscle fatigue and pain, but that’s the disease process. I can’t do anything about that.”

And there are no pity parties for this prosecutor.

She says, “I don’t wake up every morning and think, ‘I have MS.’ It doesn’t consume my life. I enjoy my job, I enjoy making an impact. Right now I’m doing great. What could be down the road is a wheelchair or blindness, but if that happens, I can deal with it.”

What advice would she give someone recently diagnosed with multiple sclerosis?

“Start treatment early, develop a good relationship with your neurologist, be active, and do not give into it,” says Ms. Davenport.

What exactly is MS?

We talked to Emilee Davenport’s neurologist, Dr. Michael Lenihan of Adirondack Neurology Associates, to find out more about Multiple Sclerosis.

“It’s an inflammatory disease, and we feel it is an auto-immune disease and a disease of the brain and spinal cord,” Dr. Lenihan said.

“Symptoms are variable,” he said. “There are some people who have MS and never know it. But others experience a loss of vision or double vision, or numbness or weakness.

“MS is a difficult disease to diagnose. You have to prove that it will cause problems down the road.

“There is no cure, but we are trying to manage the disease. It’s like a water faucet. You can turn it on, but you can’t stop the water completely.”

“There are a lot more people like Emilee,” he said. “The disease doesn’t limit them. It doesn’t stop them from living an active life. Emilee is not unusual in that regard.

“It’s still a bad disease, but it’s not bad for everybody.”

Share
Previous Talking to the dog
Next Meet Dr. Dan Way, to be honored by ‘SAIL’