Talking to the dog

I finally know what happens when I’m left to my own devices for four days— I get a little squirrely. My husband, two teenage kids and one of their friends went on a guys’ road trip to Cleveland for major league baseball, the Rock and Roll Hall of Fame, Cedar Point amusement park, Buffalo wings at the Anchor Bar, and Niagara Falls.

This was the first time that they had gone off together, without me, for longer than a day. 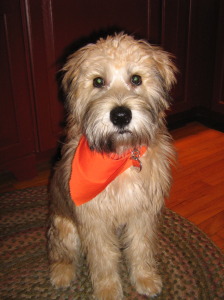 Now, I had plenty of things to do and appointments scheduled, and was in and out of the Chronicle office. But at home, it was me and Zoe, our Soft Coated Wheaten Terrier. It was kind of an early, trial run for how I might handle the empty nest syndrome. And based on how I did, the prognosis is not good.

The first day, I tried to pay extra attention to Zoe, fearing she might be upset that three quarters of the family had gone missing. I explained to her that the guys were away for a few days, but that this was a good thing because it would give us the chance to clean out closets and vacuum the dust bunnies under the beds. I told her this is important for allergies, and in fact, since she is a non-shedding breed, that she should understand why that matters.

I also told her we could use our time together as a way to really bond, girl to girl. Maybe we’d go for special walks, try some new routes, go to the Farmer’s Market together, and maybe to Sutherland’s to pick up some special dog treats. We’d play lots of her favorite tug of war game with her stuffed porcupine, turtle and owl. She seemed completely on board with this plan.

But by the second day, Zoe seemed a little down in the dumps. She was like my shadow, trailing me everywhere around the house, and cuddling up right next to me whenever I sat down on the couch. She knew something wasn’t quite right.

But I started feeling it too, the strange stillness in the house, the deafening silence of no ESPN or Office or Scrubs re-runs, the laundry basket that stayed empty, the missing piles of dirty dishes in the sink, no ringing cell phones or text message alerts. And where was that parade of kids we usually have through the house? It was kind of spooky.

With each passing day, it felt increasingly strange without all the usual activity in our house, and I became more and more convinced that Zoe and I were truly communicating, in our own special language. It went something like this:

Day 4: Woo-ee Zoemeister of the doggie dogs! Walky walky walky with mommy wommy, time to go out and do our busi-wizi-ness!! Want to go bye-bye to the office-woffice? Lovey wuvvey, who loves you more than anyone else in the whole ding dang doodle doggie world????

Was I going off the deep end? Was I turning into one of those crazy dog ladies, talking baby talk to my precious Zoe? My kids had already told me, before they left, that they were worried that I seemed to want to take the dog with me everywhere. Maybe they had seen the warning signs.

I even feared that perhaps I was starting to look like Zoe, which is what they say happens when you spend too much time with your dog. I kept thinking of the kid in the Fred MacMurray move, The Shaggy Dog. I held Zoe up next to me in front of the mirror, just to check. Nope, her eyes are brown and mine are blue, and her hair is kind of platinum. Plus, she has a wet, black nose. So far, so good.

By the time the rest of my family returned from their trip, Zoe and I had become so attached that even now, almost a week later, she still constantly follows me around the house, lies at my feet whenever I sit down, and has to sleep with a paw or her head pushed up against me at night. And I don’t mind at all. Turns out, we humans need the security of the pack, just like the doggie-dogs do.

Share
Previous More on Lyme: Dr. says ticks can transmit within 4 hours
Next Assistant DA: I’m absolutely not giving into the disease MS