Meet Dr. Dan Way, to be honored by ‘SAIL’

Dr. Dan Way of Queensbury is to be honored by the Southern Adirondack Independent Living Center (SAIL) at its second annual gala fund-raising party next Saturday, Oct. 19. 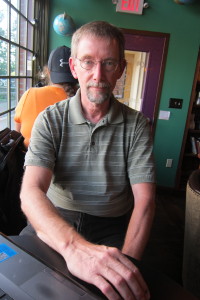 Dr. Way, 61, has been a family practice physician with Hudson Headwaters Heath Care for 32 years.

He is being honored in part for the unique nature of his service, SAIL board president David Bogue told The Chronicle: “He still makes house calls,” one of the few physicians here who do so.

As part of his practice, Dr. Way said he spends several days a month traveling Hudson Headwaters’ Adirondack territory to treat far-flung, often impoverished and elderly patients who otherwise would not find their ways to medical care.

“I have four roles with Hudson Headwaters, Dr. Way explained to The Chronicle. He covers the Indian Lake health center — one of only two physicians in Hamilton County, which has just 4,200 year-round residents, the smallest county by population in the state, with the lowest density population (two people per square mile). in the Eastern United States, he notes. There’s not a single stop light in the county, he adds.

Also for Hudson Headwaters, Dr. Way does rounds at Glens Falls Hospital, and serves the Tri County Nursing Home. Two days a month he reserves for home visits to patients in a territory that spans from Speculator and Blue Mountain Lake to Glens Falls, covering Essex, Warren and Hamilton Counties.

“There are a lot of very stubborn people in the Adirondacks. They want to live in their own house until they die. Maybe their family lives far away. They live very marginally.”

He recalls a patient who insisted on remaining in the tiny, decrepit trailer he’d lived in all his life. When the man’s caretaker sold off part of his extensive Adirondack property in order to build him a small, safer house. “He died of a broken heart,” Dr. Way recounts.

“These are people who hold onto their land, their roots sunk so deep that trying to uproot them from their homes is like pulling a tree out of the ground. But that’s also what keeps them strong. One guy told me, ‘Adirondackers are harder to kill than a 10-pound cockroach.’ ”

What’s he do with the stories he gathers?

An accomplished photographer who says he also always enjoyed writing, Dr. Way published his first book of portraits and essays about his hardscrabble, uniquely Adirondack patients in 2004. He called it All in a Day’s Work.

The new sequel, Never a Dull Moment, is due back from the printer this week.

Dr. Way aims to have copies available for purchase and signing at the Oct. 19 event.

“I’ll be offering a portion of proceeds from sales to benefit SAIL, and I will have some of my prints in the silent auction.”

He’ll also give a slide-illustrated talk about people profiled in his book.

“I’ve just become so fond of Adirondackers,” Dr. Way says. He was raised in Pennsylvania, outside Philadelphia, but Dr. Way says his roots were always here in Glens Falls, where his mother’s family is from.

Some of his motivation, he says: “I don’t know how long this way of life will last. It’s such an aging population.”

Of the home visits he says, “It was my dream, and they [Hudson Headwaters] let me do it. I’ve been doing it all along, but systematically for 10 years.”

“I have a lot of respect for their accomplishments and careers,” he said. “Dr. O’Keeffe delivered 10,000 babies, and then retired young enough to still have a life. I like that model. Of course, I have great admiration for Dr. Rugge. To me, he’s more of a magician than a physician.”

A third section tells the stories of “legends” such as the late, long-lived Adirondack advocate Clarence Petty.

Still, he returns to the stories of his regular patients, such as a woman who has long suffered chronic pain that was only recently diagnosed as mitochondrial disease. Having always been told it was in her head, “it was a relief to know she’s not crazy,” he said, even if there’s not much to be done about easing her symptoms.

Another patient in her 80s was so gravely ill, six months in a hospital and nursing home with so many tubes and aggressive treatments, “she went through hell,” Dr. Way recounts. “Her whole goal was to get back home. She’s so tough and stubborn, she made it.”

‘The humanity of medicine’

Besides the general reader, Dr. Way says he writes with medical students in mind.

“I’m trying to preserve the humanity of medicine,” he says. “It’s very personal, not some clinical textbook. In my first book, I called it the doctor-camera-patient relationship. When they allow me to take their picture and write their story, they have to trust me. It strengthens the bond between us.”

The new Affordable Care Act “doesn’t do the most important thing,” he suggests, controlling costs of pharmaceutical or insurance companies, or the way procedures are billed, which favors expensive tests.

“We save money by keeping patients out of the hospital,” he says, but ironically, that lowers hospital income. “If you’re trying to save money, you need to invest in primary care,” he suggests. “Physicians are burning out with all of the regulations,” he adds. “I refer to it as the dehumanizing of health care.”

The book, Dr. Way said, is an extension of his own drive in opposition to that. His primary goal: “Helping people of the Adirondacks live independently.”

His model has also become something of a recruiting tool for Hudson Headwaters, he said. At least one young doctor who’s joined the fold came to the Network after reading Dr. Way’s first book and hearing him speak about the way he practices what is known in the field as Rural Medicine.

This second book, Dr. Way self-published under his own “Indian Lake” imprimatur. “I learned from the first book. I wanted it to be more artistic in terms of the layout, to put more focus on the pictures. This one has more meat.”

Got his start with a Brownie camera

Besides the book, Dr. Way has long written for the Adirondack Life Magazine, and his photographs and stories are featured in the New York State Family Medicine Journal, among other publications.

He said he got his start as a photographer at age 11, when he won a Brownie camera for selling wreaths as a Boy Scout.

“Later,” he says, “I became the high school yearbook photographer. I learned that it was a way to get into places and earn a little prestige, a chance to take pictures of the pretty girls on the soccer team and write about their exploits.”

He wrote his first story about a patient in 1997 for Adirondack Life; that story, of Frank Lillibridge, is included in this collection.

Learn more about Dr. Way and his books online at www.danielway.com.

Share
Previous Assistant DA: I’m absolutely not giving into the disease MS
Next Our Oct. 31 issue