Peter & Gordon and Chad & Jeremy…sounds like a Neil Simon play but it’s the start of a British Invasion classic rock pairing coming to the Strand Theatre in Hudson Falls, on Thursday, March 5, at 7:30 p.m. 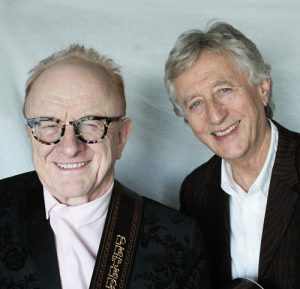 On stage: Peter Asher of Peter & Gordon — back after a hugely successful show at The Strand last July. This time, he’s touring with Jeremy Clyde of fellow Brit Invasion duo Chad & Jeremy.

Tickets cost $35. In a first for the Strand, they’re also offering VIP premium tickets with meet-and-greet/photo op for $75.

They’ve sold out the first row and are adding a second row of VIPs, director Jonathan Newell reports.

Peter and Jeremy’s respective British Invasion duos were collectively responsible for 30 Billboard chart hits, The Strand notes. These include “A World Without Love,” “Woman,” “I Go To Pieces,” “I Don’t Want To See You Again,” “Lady Godiva,” “Distant Shores,” “Yesterday’s Gone,” “Willow Weep For Me,” “Before and After” and “A Summer Song,” among others.

They tell stories from their travels, too.

Peter, also a high-power promoter who discovered or supported everyone from early Paul McCartney and John Lennon to James Taylor, Carol King, Diana Ross, Linda Ronstadt and even Ed Sheeren, is promoting his new book The Beatles: From A to Zed. Jeremy tell tales of appearances on TVs Batman, among other adventures.