By Mark Frost, Chronicle Editor
BOOM! Just like that, Glens Falls has a new annual signature …

BOOM! Just like that, Glens Falls has a new annual signature event — and at a lean time of year. The Adirondack Film Festival will now own that late October weekend between Columbus Day and Halloween. Its first go drew crowds, won raves, generated electricity that had downtown abuzz.

It was cozy and exciting simultaneously. Chad Rabinovitz, the Producing/Artistic Director of the Adirondack Theatre Festival, created this film festival offshoot. When he told me his vision months ago over lunch at Poopie’s, I bought into the concept — but I’ll confess I had no idea how thoroughly he’d thought this through, how perfectly he’d execute on it. The Adirondack Film Festival hatched fully formed, totally realized.

Chad was in a hurry because he said Glens Falls was such a natural for a film festival that he was afraid somebody else would beat him to it.

It starts with the fact that three buildings with four places to screen movies stand within a block of each other — the Wood Theater, Crandall Public Library and 190 Grille & Cinemas (the former Aimie’s Dinner & Movie). It meant you could walk to everything — convenience and intimacy.

That Ed Moore had bought the Queensbury Hotel and that the Exit 19 Ramada was open to possibilities gave another crucial boost: Free rooms where the film festival could lodge guest movie makers. “We couldn’t have done it without both of them,” Chad told me. 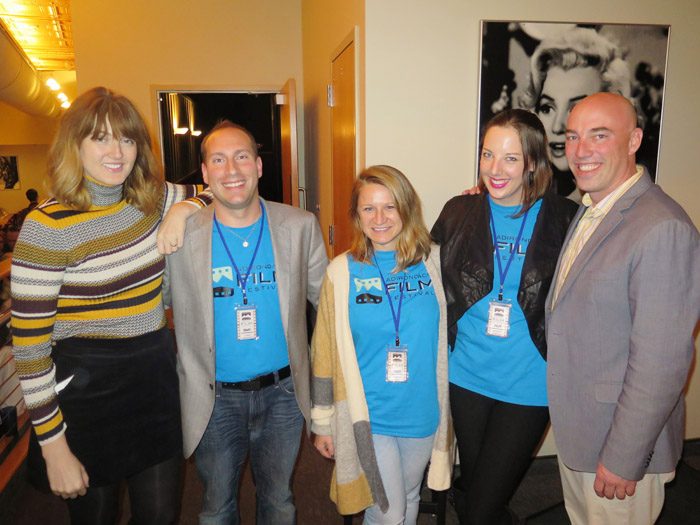 And if you’re thinking “well, the Ramada isn’t within walking distance,” Chad’s ahead of you — limousines courtesy of Premier Plus, making a constant loop carrying VIP’s between the Ramada and the downtown.

Chad connects people, businesses, the arts. When the Theatre Festival board greenlighted the Film Festival (not without some heavy-duty debate, I’m told), Chad tapped experts he already had on speed dial.

By chance on Saturday afternoon, as Sandy and I were waiting for a movie at 190 Grille, Jessica Levandoski happened by, introduced herself and asked which movie we were queueing up to see. She filled us in on that movie and on the one playing on the other screen, too. Turned out she knew all the movies because she’s the one who selected them. She lives in Chicago, programs several film festivals and themes. Chad tapped her expertise, and she booked a slew of interesting, worthwhile movies.

Like everyone else, Jess was over the moon about the result. She said she couldn’t believe it Friday morning at 11 a.m. when the very first films at 190 Grille drew crowds. She says that given the proximity of New York and Montreal, this will become an international film festival. The movie makers love being here.

She also said she’d never seen a festival as well organized and orchestrated as this one. Chad does details. But he’s a big-picture guy, too. When I urged him Monday to add a third day to the festival next year, he wasn’t buying it. Wants to see how Year 2 goes. Needs to know screening rooms will stay jam-packed. Realizes the success and energy derive from everything being full up.

The moment was right for this Film Fest in Glens Falls because beyond places to show movies, we’ve got this expanding array of restaurants, and bars, lodging, retail. Festival goers can eat, shop, stay and knock down a few.

Glens Falls also has something old, great and irreplaceable: Warm, respectful people who’ll pay attention and who like to support things. It makes for great audiences, as Jason Robards commented after he performed Love Letters with Elaine Stritch at the Lake George RV Park as ATF’s opening act.

An added note about that hometown flavor. Saturday, between movies, we made our way a block north to the Church of the Messiah Parish House for the NAACP’s annual Soul Food Dinner (never pass up a chance at that Sweet Potato Pie). I also stopped at the Methodist Church, which was serving a free community dinner.

This is Glens Falls, too. All happens here for a reason.