By Cathy DeDe, Chronicle Managing Editor
“Would you guys be willing to speak for your entire …

“Would you guys be willing to speak for your entire gender?”

It was the Adirondack Film Festival, and comedy panel member Opus Moreschi — head writer and supervising producer of The Late Show with Stephen Colbert — wanted to know what the three female speakers thought about the role of women in comedy writing.

Tami Sagher of Inside Amy Schumer, Girls, 30 Rock and other shows spoke earnestly of how the upcoming generation of female comedy writers seem more naturally comfortable, when it was perhaps more of an anomaly for her, coming up through the ranks a decade earlier.

Ashley Nicole Black of Full Frontal with Samantha Bee suggested that her comedy arises as much or even more from a race perspective as from gender. 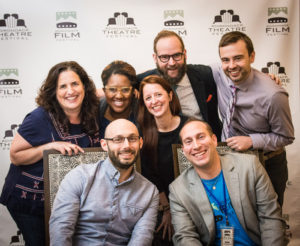 That was Leila Strachan, who writes for Unbreakable Kimmy Schmidt, among other shows, going purely for the deadpan.

It’s pretty much how the Saturday afternoon comedy panel went: Clever, thoughtful, then off the wall. The Festival itself, first such event here in Glens Falls, was organized to a “T” by the Adirondack Theatre Festival, a rousing success on many fronts.

On this front: The Ballroom at the Queensbury Hotel was packed, just one of many well-organized, well-attended events all weekend.

Props to Chad Rabinovitz and team.

Besides the three women speakers and Mr. Moreschi, Ryan McKee of the Late Late Show with James Corden held up the male side. Digital sitcom writer Timothy Cooper moderated.

Could there be a more heady list, plucked from the top shelf of current comedy talk shows and cutting edge TV shows?

I was particularly interested to hear them talk about how a “writers room” is run. You’ve maybe seen the scenes on TV programs like 30 Rock. First-hand, the writers were casual about how it goes, but revealing. It’s their base reality.

“No one tells you in school that the majority of the job happens in a room with other people,” Mr. Moreschi said.

Some rooms are generous, they said, others more competitive. “The worst is when the head writer doesn’t even listen to what you’re saying,” Mr. Moreschi offered. Better the improv comedy technique of “Yes, and…,” they suggested, improving another’s ideas versus cutting down or ignoring them.

It’s typically a mix of collaboration and solo writing, they said, doled out in different ways depending on the show.

Several writers said they got funny for a living later in life, jettisoning more serious aspirations. Ms. Strachan was a Comparative Religion major until she discovered comedy writing. “I never thought I was funny,” she said, but then recently discovered a pithy bit she’d written for a class assignment at age 7: “Comedy is when a very important man falls down the stairs.”

That drew approval from her fellows. 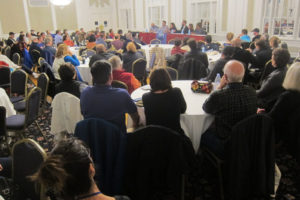 “I was always doing weird stuff in school,” Mr. Moreschi said. “I had a big report due, and I made a puppet show of Oedipus, with bloody eyes that came out. I had the curse of creativity at a young age.”

Ms. Black was going for a PhD in performance studies, writing about minstrel shows and history, until she interviewed an improv group for a research paper, “and I realized, this is much more fun.”

Hers is some edgy material, butting up against issues of race and gender both. Then she fine tunes it to write for Samantha Bee’s voice — “that’s actually freeing,” she said. “I can come up with 30 words for a p-y,” referencing a recent Donald Trump quote, “but have it come from Samantha Bee’s mouth,” not her own.

Do they use their lives for material?

Mr. McKee said, “I was never going to be one of those comics who tells jokes about his wife. Now it’s 90 percent of my act.”

“Of course, that was before you had a wife,” his colleagues jabbed.

“Now I come home and I tell her dumb jokes, and she hates them.” Pause. “Just like they do at work.”

Ms. Sagher told a story about pitching an unrepeatable body-related incident from her own experience that was so embarassingly gross, even 30 Rock’s Liz Lemon couldn’t go there. “That, on my second day on the job,” she confessed, still willing to share the tale with us, the whole cringe, including the blank unforgiving stares from her fellow writers, everything.