Mark Ingleston, incoming chairman of the Adirondack Nationals Car Show for Albany Rods & Kustoms, said he was surprised by Lake George Mayor Bob Blais’s complaints about the car show, as stated in his end of year letter to taxpayers and reported in last week’s Chronicle.

Reached by phone in Florida, Mr. Ingleston said, “We have dealt with the mayor a lot over the past multiple years.

“I talked with him two weeks ago just to let him know we were changing the guard for the show, and the conversation had nothing to do with that. It was business as usual.”

He said, “We as a club and organization have no intention of going somewhere else, and I’m sure the hotels don’t want us to go either.

He noted, “We are on the verge of signing a contract with the Fort William Henry for another three years.”

Mayor Blais’s report to taxpayers suggested that the Adirondack Nationals Car Show “has outgrown the confines of the village.” He suggested the state fairgrounds in Syracuse might be a better venue.

Mr. Ingleston responds, “There is already a big event there.”

Re ‘burn-outs’ on Canada Street

Mayor Blais said, “Sooner or later there is going to be a serious mishap,” especially from people not affiliated with the car show who do burnouts on Canada Street.

Mr. Ingleston replies, “Other big events in Lake George have more harm, where people get hurt or have even died. I don’t want to make trouble for any other event, but that is true.”

He said, “Our registered participants are great. We have rules and if you get caught breaking them, you’re removed from the show and not invited back.” 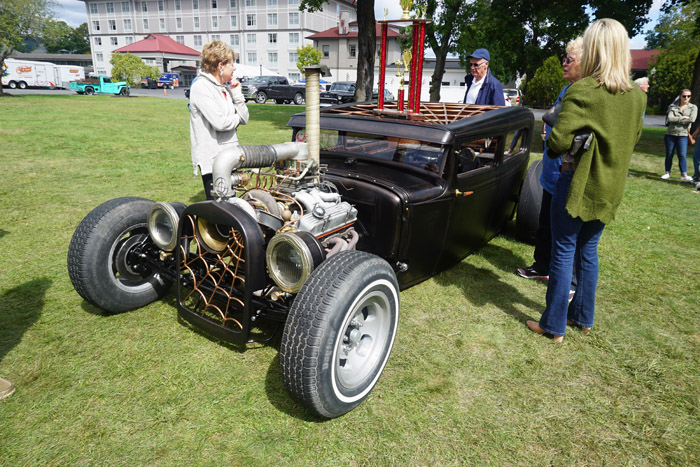 Mr. Ingleston said the trouble area is the hill on Canada Street outside the Fort William Henry property. He said that especially during the day — when he notes that official participating vehicles are displayed on the fort grounds — spectators will cut off traffic to encourage non-registrant vehicle owners to do burnouts.

“We have a few ideas to alleviate the burnouts,” Mr. Ingleston said. He said he would not elaborate until they can talk with the Mayor and the Sheriff’s office.

This year’s 32nd annual Adirondack Nationals at the Fort William Henry is scheduled for Thursday to Sunday, Sept. 10 to 13. Registration open on Feb. 1. The show typically fills all 1,500 slots within days.

The show draws custom hot rods and other classic cars from 1979 or older.

Sheriff LaFarr: We can make it work

Warren County Sheriff Jim LaFarr, contacted for comment, said, “I grew up with the car show. Now that I’m Sheriff, I can look at it through a different lens. But public safety is always our first priority. There is no compromise there.

“How we work this could affect tourism. I would never advocate the car show leaving Warren County.

“I will be personally involved with all the meetings, focusing on how we can do it different. This is not a criminal element we are dealing with. You have some that operate a little erratically. I will work diligently to ensure the Village is as safe as possible.”

— With reporting by Gordon Woodworth