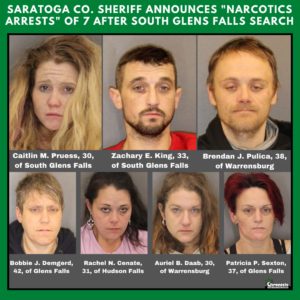 They said they arrested Caitlin Pruess, 30, on November 23 after a lengthy drug trafficking investigation. She is accused of selling crack/cocaine heroin, fentanyl, and crystal methamphetatime throughout Saratoga County.

Ms. Pruess was charged with 12 alleged felonies, including four counts of 3rd degree sale of a criminal substance, as well as four misdemeanors.

The rest of the group were charged with multiple felonies and misdemeanors each, relating to controlled substance and paraphernalia possession.

All were arraigned in Moreau town court and released on their own recognizance due to return on a later date, except Mr. Pulica and Ms. Cenate who were each remanded to Saratoga County Jail in lieu of cash bail/bond.