Warren County Sheriff’s office reported that on Sunday, November 27 at 3:45 p.m., they were called to the Queensbury Wal-Mart at 891 State Route 9 to investigate a male with a gunshot wound to the hip.
The victim was transported by EMS and is undergoing medical treatment, the Sheriff’s office said.
Law enforcement are still working to identify the suspect. 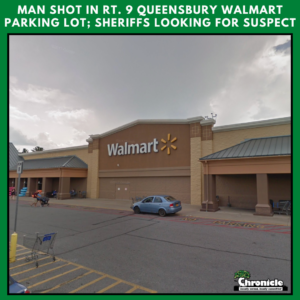 “Walmart was evacuated and closed out of an abundance of caution, but no part of the incident occurred inside of the store, it all took place outside in the parking lot,” the Sheriff’s Office added.

“The Sheriff’s Office and the New York State Police are working to identify a suspect and/or a suspect vehicle and will provide updates as information becomes available.  At this time, this is an active investigation, but there is no reason to believe there is a threat or concern to the general public,” the press release added.
“If anyone has any information or possibly captured any video or photographs of the incident, they are asked to contact the Warren County Sheriff’s Office Criminal Investigations Unit at (518) 743-2500 option #1.”
Share
Previous Plight of the mama bear
Next 7 arrested in alleged SGF narcotics bust