The Warren County Sheriff’s Office announced it has arrested Adrian A. Simental, 33, of 1618 Route 9, Moreau, in connection with the November 27 shooting that occurred in the parking lot of Walmart on Route 9 in Queensbury. 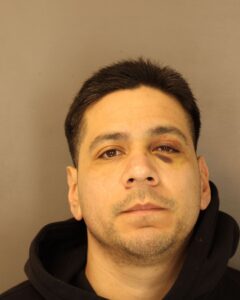 Mr. Simental was arrested the evening of November 29th at his residence and has been charged with felony counts of alleged attempted first-degree assault and second-degree criminal possession of a weapon in connection with the incident, the Sheriff’s office said.

Mr. Simental is accused of firing a handgun at a 52-year-old New York City man following an aggressive driving encounter that occurred between Mr. Simental and the victim moments earlier on Route 9, the Sheriffs office said in a press release.

The Sheriff’s Office said its investigation showed the aggressive driving encounter occurred in the area of Northway Plaza, and that Mr. Simental’s vehicle followed the victim’s vehicle into the Walmart parking lot, where a verbal and physical confrontation ensued.

Mr. Simental is accused of firing the handgun during the confrontation and hitting the victim in the lower abdomen.

The victim was treated at Glens Falls Hospital and Albany Medical Center, and has since been released, the release said. His injuries are not considered life-threatening.

Mr. Simental was arraigned Wednesday, November 30, 2022 in Warren County CAP Court before Justice Eric Schwenker and remanded to Warren County Jail for lack of $200,000 cash bail or $600,000 bail bond. He is due back in Queensbury Town Court on December 5, 2022.

In the release, Warren County Sheriff Jim LaFarr offered thanks all of the agencies and members of the public who assisted the Sheriff’s Office in their investigation and worked diligently to locate Mr. Simental.

“We strongly encourage everyone to avoid confrontations when faced with aggressive driving encounters and we ask the public to seek assistance from law enforcement when confronted a “road rage” incident, rather than attempting to resolve these matters themselves,” Mr. LaFarr was quoted.