On stage at Summit Fest 3

Wild Adriatic’s third annual Summit music festival is Friday and Saturday, Nov. 8 and 9 at the Queensbury Hotel in downtown Glens Falls. Below is a quick look at the schedule. 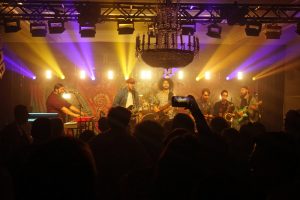 Wild Adriatic brings its third annual Summit music festival to Glens Falls on Friday and Saturday, Nov. 8 and 9 — transforming the hotel’s stately chandeliered Ballroom to the most elegant of rock and roll music halls, and Fenimore’s pub to an acoustic rock and jazz showcase.

On tap: Seventeen bands playing from 6 p.m. to 2 a.m. both nights — with band members and fans from around the country staying at the hotel for an all-inclusive experience.

Headliners (besides WA themselves) include Los Angeles blues-rock party band Andy Frasco and the UN, and Portland, Maine, rock-jazz-funk superstars The Rustic Overtones.

Wild Adriatic is three guys from Queensbury who now tour the country — and the world — with their blend of soul and rock, driven by the killer vocals and guitar of frontman Travis Gray, the antics and wild afro of bass player Rich Derbyshire, and the drum licks and heart of Mr. Vosganian, famous for his hugs.

“Why do we do this festival?,” Mateo offers. “We are gone from our home town 250 days of the year. This is our one time to unite all of our friends and family, the bands we’ve met on tour and all of our band friends here, all under one roof.”

“This is something unique to us. It’s really inspired by our experiences on the Rock Boat (an annual music festival aboard a cruise boat that WA has played for several years). “The idea is having a captive audience, bands and fans interacting in the one place.”

Musicians from previous Summits are returning as audience, Mateo says. Fans they’ve made in Colorado; in Appleton, Wisconsin (their adopted second hometown, they say) and on the Rock Boat will come also. “We have people coming from all over and staying here, making plans of meeting up to do brewery tours, one group going to the Shirt Factory,” he adds.

Of Andy Frasco and the UN, Mateo says, “We’ve become really good friends with him,” Mateo says. “They have one of the most fun live shows. We met in 2016 or 2017 on the Rock Boat. There was a cold-call email between bands to see who wanted to jam together, and we were the only two who responded.” They’ve since toured together several times, he says. 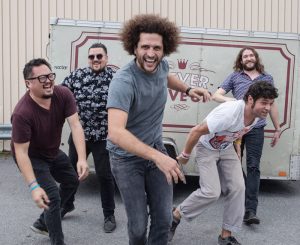 Andy Frasco and the UN — Headlining Saturday night at the Summit music fest in Glens Falls.

“Andy is a keyboard player who knows a lot of boogie blues. They’re very good at getting the crowd involved.

“They do one thing they call the ‘Bar Mitzvah,’ he and Rich (Derbyshire), up on chairs riding out in the audience. They’ve both got ’fros. It’s wild. He refers to Rich as his son,” Mateo laughs. “They do crowd surf racing and other general insanity.”

Of Rustic Overtones: “They are obvious icons in the Northeast. We thought it was far-fetched that they would come play here but they said yes. They’re sort of funky alternative rock, with a really good horn section. They’ve had a lot of hits on WEQX.”

Annie in the Water, of Albany, “we played a couple of gigs with them, and did a festival at Killington with them this summer. They do more high energy jam band-style music.

Chestnut Grove from Philadelphia is the only band to have played all three Summit Festivals. They’ve become a local favorite, also playing the GEM Festival in summer and returning to play at Gug’s, the Glens Falls winter watering hole, for several shows. Frontwoman Dee on vocals, drums, keyboards and more — “She’s just one of those jerks who plays everything really well, and I’ll say that to her face,” Mateo says. “Classic rock and roll vibe” is how he describes the sound.

Attendance is “on track to exceed the first two years,” Mateo expects.

Still, the festival so far loses money, he says. “Our management keeps asking us, why keep doing the festival if it’s running a deficit? You might as well ask, why be in a band at all, or life? It’s not a great financial success, but you’re succeeding in life.

“We’re excited to have our full band for the festival — including Adam Patten on guitar, Mike Oehman on sax and Dustin DeLuke on keys. Bass sax player Vicky Oehman is off for medical reasons, he notes.

Mateo says, “We’ve had two years of creating great memories. We think we can’t possibly figure out how are we going to top this, and then every year we find a way.”

This year, he said he’s figured how better to control costs. “The festival is bigger, but we’re spending less than both last years, to the end of trying to turn it somewhat profitable, so we can start expanding it.”

Back to Europe, new EP

Meanwhile, Wild Adriatic just came off of a three-week tour of the Southeastern U.S., flew to Texas and back, then drove to Toronto, Mateo reports.

They leave shortly for their third European tour: Seven countries, 25 shows in 30 days, this year including Paris and other big cities, he notes.

“The Summit is our last hurrah here,” Mateo says. He says he’s learned: “This time, I’m really going to enjoy the cities, not treat it like a regular tour where we go out to a party all night, get the knock on the door at 11 a.m. to get back in the van. I’m going to take it easy and really see the cities, visit churches and things, what I missed on the last two tours.”

“It’s a little bit of a new thing for us,” Mateo says. “The songs are still us, but less riff-based rock, more on the keyboard, more focus on the songwriting. We are thinking more about what we’re trying to say. Our writing muscles are strong now.”

They’ve got 15 new songs they plan to record for an album later this winter.

Meanwhile, Mateo adds, they’ll be back on stage in “the 518,” the Capital Region, for a New Year’s show and another big Albany gig, both still to be announced.