By Gordon Woodworth, Chronicle News Editor
The Halloween night wind and rainstorm that dumped up to …

The Halloween night wind and rainstorm that dumped up to five inches of rain in less than 12 hours caused downed trees, power outages and numerous road washouts in northern Warren County as creeks and rivers jumped their banks. 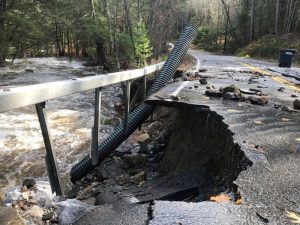 Hague was particularly hard hit, with County Route 8 closed for several days, and other roads washed out.

“That’s a tremendous jump,” Roger Smith of the Lake George Park Commission told The Chronicle Tuesday morning. “We had just over three inches of rain here in Lake George Village, but there were reports from Essex and Hamilton Counties of up to six inches of rain. Hague and Ticonderoga were hit hard.”

The flow of the Hudson River more than quadrupled in a day, from 8,000 cubic feet per second on Thursday to 35,000 per second on Friday in Fort Edward. The U.S. Geological Survey has a water gauge just upstream from Irving Tissue. 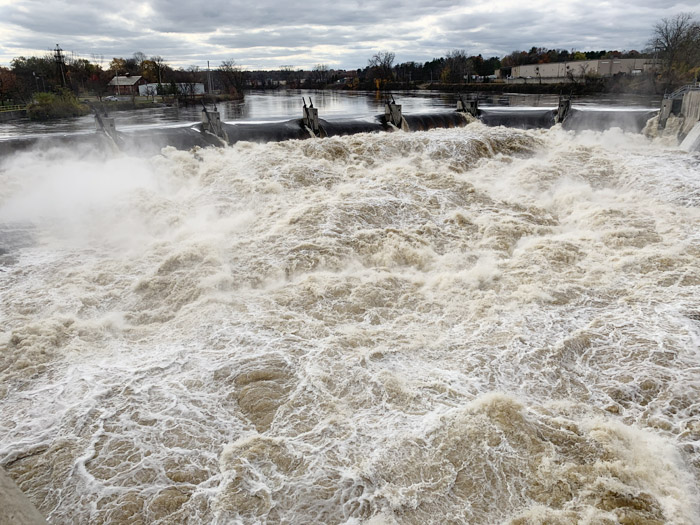 Glen’s Falls were roaring Saturday. All of the gates on the dam were open, a rare sight. See video of the torrent on the glensfallschronicle Facebook page. By Tuesday afternoon it had garnered 20,000 views and been seen by 29,917 people. Chronicle photo/Mark Frost

Drivers across the bridge between Glens Falls and South Glens Falls had to turn on their windshield wipers to clear the mist that formed from the raging waters.

The Schroon River was three feet over flood stage at Riverbank in Bolton, higher than it was this spring.

As for Lake George, the Park Commission’s Mr. Smith said, “The lake was already at an unusually high level. Typically, we see the lake drop in September and October, but we got seven and a half inches of rain in October, and normally we get two inches. So it was fully saturated in the basin and the lake was high, but we got no calls. I did see quite a few docks under water on Monday, and the pen stock pipes at the outlet in Ticonderoga plugged up and the gate shut off automatically.

“At that point the concern for flooding in Ticonderoga was real, and the delay may have stemmed any damage. The water was six inches over the gate, so a manual discharge was out of the question.”