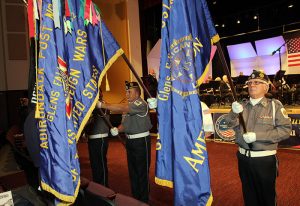 Admission is free to veterans and active duty members of the military, as well as to students and children. It’s $10 for all other adults, general admission.

This year’s concert also marks the 75th anniversary of D-Day, 1944.

The band, conducted by music director Michael Craner, will pay homage to veterans and all members of the U.S. military “for their patriotism and sacrifice while willingly serving in the United States Armed Forces,” they said.

A joint Honor Guard from local American Legion and Veterans of Foreign Wars posts will present the colors at the concert. Local U.S. Armed Forces Recruiters and the Army National Guard will escort veterans to their seats; the Patriot Guard Riders will provide an Honor Guard as they approach and enter the building.

LGCB encourages Veterans and members of the military from throughout the area to wear their uniforms.