Voters will decide whether to approve the map on Election Day, Tuesday, Nov. 8.

Mayor Bill Collins directed a task force to redraw the lines to comply with the constitutional principle of one person-one vote. Even though all five wards have equal voting weight on the Council, Ward 4 currently only has 1,883 residents, less than half the 3,884 in Ward 2. 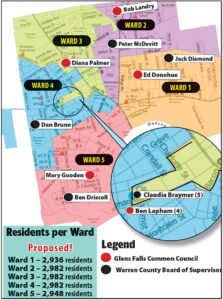 The first revised map brought the populations to within 10% of each other.

But in the new remap, at least one ward line — Ward 3 — now has an odd shape, like a finger, poking into Ward 4.

A stated goal of the Task Force was to keep elected officials in their same wards and not necessitate a special election.

But its unintended result is that now the map looks blatantly skewed in favor of some current office-holders.

The complication arose from how near each other — half-a-block — that Claudia Braymer (Ward 3 county supervisor) and Ben Lapham (Ward 4 councilman) live.

“Initially, I was kinda taken aback by that. It sort of looks like gerrymandering,” Mr. Lapham said about the map when contacted by The Chronicle.

“I don’t believe that preserving incumbency should be seen as a virtue.”

Braymer: ‘Okay with me either way’

Ms. Braymer, who as a County Supervisor was not involved with the redistricting, said, “I understand that they wanted to keep each of the current electeds in their existing wards. I also would have respected new lines that were objectively placed without regard to where the current electeds reside.

Retired City Clerk Bob Curtis, who chaired the mayor’s redistricting committee, said, “There weren’t rules from the State. Our decision early on was to try and keep elected officials in place.”

He said, “If we had to disenfranchise an elected official, we’d be staring at a lot of other issues that would raise.”

City Attorney Karen Judd said the committee followed “common sense” guidelines or suggestions, rather than any state law, “to keep elected people in their current wards.”

Ms. Judd and Mr. Curtis said the alternative would be “to wait three years” until the next election when both City and County seats are on the ballot — that would be November 2025.

Ms. Judd said the other possibility, to redistrict now without regard to sitting officials, and to hold a special election in any Ward where the official was displaced, “was not brought up or discussed” as part of the task force.

Ms. Judd noted that a special election would involve “a lot of trouble and added expense for the citizens of Glens Falls.”

At the June 14 meeting, responding to a question from Mr. Lapham, Mr. Curtis said, “Why is it so bad to look at trying to have representatives at the City and County level still in their Wards? How do you no longer have a Council member or Supervisor in the Ward? That was a no-brainer to us.”

Mr. Curtis told The Chronicle, “We were under pressure” to implement the new boundary lines quickly.

He said the plan to re-draw boundaries began last October, when Glens Falls attorney John Caffry wrote then-mayor Dan Hall pointing out that the distribution of residents under current Ward boundaries “could be seen as unconstitutional,” Mr. Curtis paraphrased.

“The purpose was to act as quickly as possible,” Mr. Curtis said. “No one said this, but we were put on notice in effect that if it didn’t change we were going to have some problems.”

Ms. Judd said, separately, “I think the map accomplishes all we set out to do.”

She noted too, “Every Ward wanted a piece of downtown. They’re all invested in the downtown, and we achieved that.”

Mr. Lapham noted that the resolution that goes before voters in November mandates that the City revisit the equal population levels of residents per ward every 10 years, following the U.S. Census.

“It also puts in place some things, some community interest pieces,” such as “keeping schools and parks in their respective communities,” Mr. Lapham said.

He said he’d prefer to see boundary changes tied also to years when both City and County officials are on the ballot.