Young saxophonist Sean Pettis and Taco Bell have a very good thing going. He won a $10,000 Taco Bell Foundation scholarship; then they flew him across the country to play at their corporate conventions.

The Glens Falls Class of 2020 graduate and student at Belmont College in Nashville has been an enthusiastic employee since 2020 at the Exit 18 Taco Bell in Queensbury.

He applied “because one of my friends worked there, not even gonna lie,” he says. He thought it would be a fun little summer job.

“But then I stuck with it because everyone at Taco Bell, we have like a super close relationship, and it’s really fun. And it’s a fast paced environment, which I love,” he said.

He said he has the “kindest, most sweetest boss, her name is Samantha Rathbun.”

Sean found out at work that Taco Bell has a scholarship competition open to both employees and non-employees. Sean decided to apply.

“You send in a short video explaining your passion and how you’re pursuing it,” he said.

His passion? “Spreading positivity and happiness through the power of music.”

He included a video of himself playing saxophone. “I mostly play alto, but I also play soprano, and tenor and bari.”

He entering his junior year majoring in Creative and Entertainment Industries with a minor in Music Business.

“They heard me in the video, and then they ended up inviting me to a franchise owners conference in Scottsdale, Arizona,” Sean said. 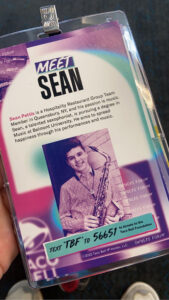 There he performed for “franchise owners from across the country,” alongside two other scholars, who sang.

Later, Taco Bell flew him out for a talent show in San Diego, California, again with other scholarship winners.

“I got to meet the CEO of Taco Bell, Mark King. I got to meet this woman, Elaine Swan. She is an etiquette expert. So she taught us…how to network while using proper etiquette,” he said.

“That was my first time [traveling to] both of those places, which was really amazing. And I’m so appreciative that they paid for everything.

“It’s all inclusive, on top of the scholarship, like that is just insane.”

Sean said the money for the scholarship comes from franchise owner donations and “rounding up at Taco Bell. So you order something, and then they ask if you want to round your change up to the nearest dollar” as a donation.

The money “also comes from the franchise owners, they donate a lot of money, as well.”

This summer Sean was back working at the Exit 18 Taco Bell as shift lead.