Jim Tracy, a Fort Edward native who spent 10 years as a reporter for The Post-Star, has written a new book: Sworn to Silence: The Truth Behind Robert Garrow and the Missing Bodies Case.

Garrow’s Adirondack rampage in the summer of 1973 in which he stabbed four people to death including a woman he abducted, raped and whose body he hid, and then eluded an all-out manhunt for 12 days, terrified the public and consumed the police. 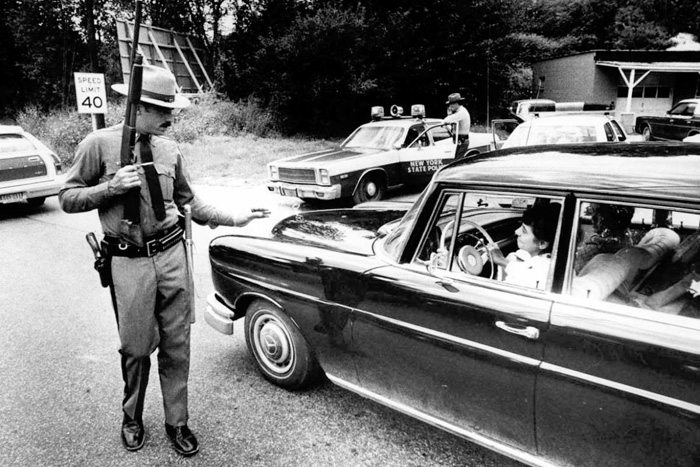 I read the 350-page paperback in a single day. Tracy, whom I don’t know, has a reporter’s eye for detail. The book moves right along. It has some fresh angles.

He interviewed at length two major participants in the saga. One was now deceased New York State Police Senior Investigator Henry McCabe, who was based in South Glens Falls. The other was Frank Armani, now 83, Garrow’s defense attorney, who evidently spoke freely and relishes the limelight and chance to add his spin even if some of what he says puts him in a bad light.

The book gives emphasis to Garrow’s attorneys’ decision to keep secret for months the fate and whereabouts they knew about the missing victims, even as anguished families pleaded for their help.

The attorneys — Mr. Armani and the late Frank Belge — were vilified at the time.

But Tracy writes: “In the 2000s as the story grew in law schools, and newspapers published look-back stories on the case, Armani began taking every opportunity to weave his narrative of the case…

“It has paid off. Law scholars today say the case provides the most controversial example of a lawyer’s duty to maintain client confidences under impossible circumstances. Armani’s awards have accumulated. In 2006, he received a distinguished-lawyer award from the Onondaga County Bar Association.”

The crimes & the manhunt

On Saturday, July 14, 1973, Danny Porter and Susan Petz from Boston disappeared in Wevertown, near North Creek, after pitching a tent.

On July 30, police found Garrow’s abandoned car and were finally able to identify him as their suspect.

The manhunt ensued, in Speculator in Hamilton County, reaching much further.

Garrow “was last seen getting gas in Baker’s Mills,” by Betty Baker, a “downstate transplant,” at the Whispering Pines.

“Then,” Tracy writes, “there was a reliable report he was spotted in Lake George, although it turned into a case of misidentification. The news that he had been seen in Warren County widened the area of fear even further and into the Glens Falls area. Paranoia ran deep. Now, people there locked doors and loaded guns.”

Tracy writes that Susan Petz’s mother consulted a psychic who urged police to search in the Mineville area, which pretty well describes where the body long afterward was found. On Thanksgiving two 12-year-old boys stumbled upon Susan Petz’s remains.

“Exactly one week after Petz was found, a Syracuse University student was walking through Oakwood Cemetery on Saturday December 8 when he happened upon bones” of Alicia Hauck, another victim, in Syracuse. 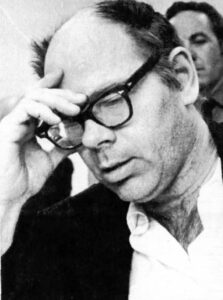 During the manhunt, Tracy says in Indian Lake, Troopers apparently had a near miss, chasing a wigged driver fleeing a roadblock, but their car conked out with a “broken fan belt and steering belt.” Tracy writes, “One of the troopers walked several miles to the nearest telephone booth.”

Tracy says Investigator McCabe worried: “Was he dealing with a repeat killer? The term serial killer would not be coined for another decade.”

The tension was occasionally relieved. Tracy writes that the Wells Fire Department sent over a coffin that turned out to be filled with beer and ice — the beer for the police; the coffin for Garrow.

Tracy keeps a flow of memorable details. Garrow’s wife Edith told investigators her husband would be clean-shaven when they caught him; he insisted on it. She said he would use his knife to shave if necessary as he did when they camped.

We’re told that Garrow never swore, had a squeaky voice like the actor Wally Cox, was a lifelong bed-wetter and was labeled “Cow Barn” by other kids because he smelled like the farm where his father sent him to work.

Tracy adds a personal link. An Adirondack hunting camp owned by his father turned out to have been accessed by Garrow for food during his flight. He entered by climbing through a transom over the front door and left behind a footprint.

The trial, the sensation, the escape

Garrow was finally caught on Aug. 9. Tracy writes that many Adirondackers remember the manhunt lasting all summer. “In reality, it was twelve days.”

Garrow suffered a shotgun wound to the leg in the capture. He spent 41 days at Champlain Valley Physicians Hospital in Plattsburgh and later parlayed the injury into a claim of paralysis.

Garrow was previously convicted of raping a woman and knocking out her boyfriend on Nov. 3, 1961. After his sentence at Dannemora, Garrow was paroled.

Mr. Armani of Syracuse became his lawyer and kept Garrow free despite his failures to show up for court appearances and as other allegations mounted against him.

Tracy says Armani realized “by keeping Garrow on the streets [after his murder and abduction of Porter and Petz] he had abetted him in the murder of Domblewski. So why not walk away from him now? What kept him going was his overwhelming excitement at handling a big case.”

Tracy says Armani knew he was in over his head, so he asked the higher-profile Frank Belge [“pronounced Bell-Gee,” Tracy writes] to join as his co-counsel.

Tracy writes that Garrow, under hypnosis at his attorneys’ request, “admitted to the murders of Porter, Petz, Domblewski, and Hauck. Plus, a slew of rapes.”

Susan Petz’s family knew none of this. Tracy writes. “Both Attorneys were still torn….Relieve the grieving parents or uphold their duties as attorneys?”

He says they offered a “plea bargain, exchanging the location of the bodies for a guarantee Garrow would be placed in a mental home.” The offer was rejected.

Garrow’s trial — “the first murder trial in Hamilton County since 1929” — was shocking and riveting. Tracy quotes from the testimony at length.

The lawyers went with an insanity plea, and rolled out details of the crimes.

Some critics suggested they revealed everything in part to benefit themselves.

Garrow testified for two-and-a-half days. What he said was harrowing, disturbing.

As a boy, his father had sent him to work on another family’s farm. He slaughtered and butchered livestock — “sticking pigs in the heart with a knife….I started when I was nine years old.”

He said that when he shot one bull, the “lead kept bouncing off the skull. So finally I had to get a 20-pound sledge hammer and I had to hit it. It would just go down to its knees so I got all the madder and I hit it again. I kept on hitting it and finally I knocked it unconscious.”

At night during the trial, Tracy writes, lawyers on both sides, investigators, reporters, the judge, relieved the tension in heavy drinking at nearby Zeiser’s Inn.

“We’d be half-blind,” the investigator McCabe told Tracy. “…If the trial was anywhere else, they would have given the…guy a mistrial.”

Convicted, Garrow was sentenced to 25 years to life in prison, but that was not the end of it. Initially sent in 1974 to Dannemora, he claimed death threats against him and was transferred to Auburn.

“In August 1976, corrections rejected Garrow’s transfer request to the elderly and handicapped ward at Fishkill Correctional Facility.” Tracy calls it “more akin to a nursing home than a prison.”

But Auburn prison physician Dr. Joseph Birardi deemed Garrow “an invalid confined to a wheelchair and confined to bed.”

Garrow got his transfer to Fishkill, where he obtained a gun, delivered by his son, provided by an inmate’s wife whom Garrow threatened to kill if she didn’t cooperate.

Garrow escaped, though briefly, and he was shot to death close by. He was 42. His son called it a “suicide by death scheme.”

In the subsequent half-century

Sworn to Silence provides a meaty postscript about many key figures in the nearly half-century since the saga unfolded.

Armani’s co-counsel Frank Belge “spiraled downhill….The star criminal defense attorney and family man quit the field of law, divorced and moved to Florida. In 1989, he dropped dead outside of his Florida condominium from a heart attack fueled by alcoholism. He was sixty-three years old….”

“Dr. Joseph Birardi, the Auburn prison physician who wrote state officials stating that Garrow was paralyzed and should be transferred, died at his home in 1983 of a self-inflicted gunshot wound. He was fifty-four. Birardi was a well-respected physician and a lifelong resident of Auburn….”

“Robert Garrow Jr. remained in Syracuse, where he still resides today with his mother on Berwyn Avenue….”

“Judge Raymond Aldrich, who told Robert Jr. that helping his father escape was what any loving son would do, began a slow but steady mental collapse after the case. Eventually, he was removed from his duties as a judge by the state’s Commission on Judicial Conduct.”

Garrow’s niece Sue Basso — daughter of his sister Florence — was found guilty of being the ringleader as her son and four other men beat to death in Texas “an older mentally challenged man named Louis Charles ‘Buddy’ Musso…On February 5, 2014, she was only the fourteenth woman to be executed in modern U.S. history. Her mother Florence passed three days later.”

As I say, Tracy’s book is packed with detail and it’s a fast read.

I spotted what seemed to me to be two little errors. I believe the Schenectady High School from which Philip Domblewski graduated was Mont, not Mount, Pleasant. And the Millbrook bakery in Syracuse that employed Garrow during his parole, I think was owned by Interstate, not Intrastate, Brands.

Minor quibbles in a strong piece of work.

Sworn to Silence is published by Post Hill Press and is priced at $17.