Editor’s note: This is the 25th anniversary of when the late Frank Leonbruno began writing — and The Chronicle began publishing — the chapters that would become his classic book Lake George Reflections: Island History and Lore. This summer we are reprinting weekly chapters with the permission of Frank’s daughters Gail and Jane.


•
By Frank Leonbruno
Special to The Chronicle, from 1996 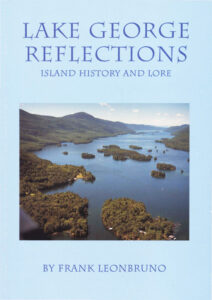 Rush Island is a state-owned island located near the west shore, at the entrance to Boon Bay in the town of Bolton.

Just how this island got its name is unknown. However, I believe that it may have come from the fact that rush — a grass which thrives in wet areas — was once present on the island.

Or it may derive from the tiny island’s exposure to the prevailing southeast winds, causing the water to “rush by.”

The shores of Boon Bay are lined with vacation cabins whose owners and their guests always delighted in swimming out to this near-by island. There they could fish, swim, work on their tan or simply enjoy a few hours of peace and quiet.

But Rush Island has, over the years, not been treated kindly by Old Man Winter and his Ice Corps.

In 1963, insult was added to injury when the island was ravaged by human vandals who cut some of the few trees which had managed to gain a foothold.

The damage was reported by Joseph Schweins, owner of Diamond Village Motel at that time, who asked the Lake George Association what could be done to help reverse the rapid deterioration of the island.

After inspecting the damage, I dispatched my foreman, Leroy Rider, and a crew of six to work on the island. Using stones brought in on a state barge as well as stones found at the site, they rip-rapped the island. When this was completed, they brought in fill and sod to protect the island from future perils of man and nature.

The very next day, we received a phone call from the Horst H. Schroeder family, landscapers and owners of another motel on Boon Bay, who asked for and were granted permission to plant two small willow trees on Rush Island. The willows were an ideal choice since their root system provides excellent protection against erosion.

Today, one of the willows has grown to become one of the island’s largest trees, easily spotted by motorists passing by on Route 9N. A lovely 25-30 foot soft maple and a cedar tree add to the beauty to this tiny island.

Rush Island is an excellent indicator of ice-out. In the spring, when the lake begins to honeycomb, the interested observer should watch this island. When it becomes covered with what appears to be snow — but is actually honeycombed ice — it is a pretty sure bet that this section of the lake will be free of ice within two or three days. A photo which I took on April 6, 1996 shows honeycombed ice standing higher than the island’s tallest tree.

On May 12, 1996, Leroy Rider, DEC Supervisor of the state-owned islands on Lake George, inspected what remains of a severely eroded island. It is in dire need of restoration as Mother Nature continues to wreak havoc.

If action is not taken soon, this island will probably disappear. Hopefully public interest will become strong enough to force the state to recognize the gravity of the problem and take appropriate steps to prevent the loss of Rush Island.

Yes, Rush Island, you are small and you have been badly mistreated. But to both year-round and summer residents of Boon Bay, you loom as their favorite.

In fact, one group of Boon Bay property owners calls itself the Rush Island Association, guaranteeing that, regardless of the island’s future, its name will always remain a part of Boon Bay.

Editor’s Note: The late long-time Lake George park ranger Frank Leonbruno began putting his memories to paper in 1996 — working with Ginger Henry, who was then a Chronicle staff writer. He first serialized the chapters in The Chronicle. In 1998 Purple Mountain Press published them in book form, as Lake George Reflections. The book remains in print, for $18.00, through stores and directly from the publisher at nysbooks.com.