“To be able to operate and not be managing projects is huge,” says Sara Montgomery, co-owner with her husband Spencer of of West Mountain Ski Area in Queensbury.

“For me, that’s probably my number-one stress — managing projects on top of staffing. It’s been six years of seven-days-a-week, 24-hours-a-day managing.”

Since taking over in 2013, the couple reports having invested $17 million in infrastructure.

West, launched in 1962 by the Brandt family, operated well into the 21st century with vintage equipment and outfitting.

Now it sports five modern lifts for its 31 trails; full mountain lighting for night skiing, and, for the first time, full snowmaking coverage after the purchase of 15 stationary snowmaking guns.

With installation imminent of final snowmaking pipeline and readying of Snowcat groomers, Mrs. Montgomery believes the 2019-2020 will be the season that West Mountain hits its groove. 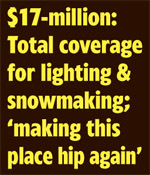 “When the projects are done, we’ll be able to do a lot of your basic maintenance,” she says. “I’ll look forward to that day for sure.”

Full-mountain snowmaking capability “is huge,” says Mrs. Montgomery, “not only for the customer, but for us, in terms of labor. Stringing out snowmaking over the course of a few months is a lot harder than consolidating into a month or even less.

“We can turn on all of the guns with the turn of a switch.”

She says, “When you’re moving the guns, the wear and tear is expensive, plus the labor. Now we’re not going to have any of that. They’re all mounted guns, so they’re all stationary. We can point them wherever we want and turn them on.

“For years, it was five trails primarily [with snowmaking], then you move the snowgun, blow snow and by the end of February, you’re totally open. We’re just getting too big and we have too many people here not to have everything open.”

She hopes the Northwest area of the mountain is poised for a breakthrough.

“That area will be very telling this year,” Mrs. Montgomery said. “Our [main] lodge was overflowing last year. We have updated that [Northwest] lodge.

“Our goal is for season-pass holders to hopefully start using that facility because it has bathrooms, it’s clean, it has a seating area, a new lift. The operational hours really resemble that of the mountain.

“There’s no reason why they can’t go over there, park and jump on the lift.” There’s also a bar and food.

Mrs. Montgomery sees the Northwest lodge and lift as a base for season-pass holders, although the area will have a ticket window open on weekends and holidays.

“We really want to get our skier visits up to about 120,000,” she says. “That’s where we see this place really thriving.

“We’re at about 80,000 right now. We feel confident in what we’re offering and we think we can definitely get to that point.”

One component that’s booming is West’s after-school ski program. Mrs. Montgomery said 50 area school districts choose a weeknight to send ski clubs to the mountain for six weeks. Since taking over the business in 2013, the number of students has increased from 650 to 1,600, Ms. Montgomery says.

“West is such a different experience than it used to be,” Mrs. Montgomery says. “We’re trying to make this place hip again.”

Cleanliness is key, she says, making things “a little shinier and sparklier.”

“I think we’re going to see a lot more of those college kids, those 20-somethings coming back here, just because the night skiing is so good, between the snowmaking, the lights and the bar scene. I think it’s all come together.”

West Mountain Ski Area aims to open for the season on Saturday, December 7.

West Mountain co-owner Sara Montgomery envisions a racing academy at West that offers housing, meals, coaching and training, combined with a public-school education at Queensbury school district. She sees it as an alternative to the more expensive ski academies that school privately.

“We want to be able to offer that opportunity to kids who want to pursue ski racing,” Mrs. Montgomery said.

“That’s what sad in a lot of ways. Kids who can’t afford it literally drop out. These could potentially become your World Cup and Olympic skiers. We’d like to be able to offer them an option.”

“We bought a building here on the property to house kids. We have the Montana tuning machine so we can race tune the kids, Mrs. Montgomery said.

“We have the food and beverage so we can feed them. Now it’s just about working with the school system so that kids can get out at a reasonable time to be on snow for training.”

The hire “was really about getting someone here that could manage all of the coaches and really get our program to that competitive level that I felt I wanted us to achieve,” Mrs. Montgomery says.

“It’s not going to happen overnight but we saw a dramatic change in our program last year, from just the training environment to coaching, just how well everything was organized and executed.”

She says West Mountain’s ski racing team is “probably the thing that I’m most excited about. It’s the last remaining big project that I have to work.” — Pat Daley