The Warren County Board of Supervisors on Friday, Dec. 20, will consider seeking “abandonment” of its 55-mile rail line from Corinth to North Creek.

“That would allow us to consider other options for the line, including creating a recreational trail,” says County Board chairman Ron Conover, who chairs the county board.

“It would be tremendous,” he says of turning the line to recreation use. But he cautioned, “It is still early. Our process for what will happen is not spelled out yet.”

Moore: ‘Looking out for taxpayers’

County Administrator Ryan Moore says, “This is about looking out for our taxpayers and trying to take the next step. Right now this is an asset just sitting there and degrading. Abandonment is a tool to get that back.”

The Public Works Committee voted in favor of pursuing the process.

“Abandonment doesn’t mean physically abandoning the railroad,” says Mr. Moore. “It means taking that corridor out of the freight business.”

A federal agency, the Surface Transportation Board (STB), would have to agree to the abandonment.

Mr. Moore says seeking abandonment “is also the most expeditious way to ferret out whether it can still be a freight line. The STB is charged to keep viable lines in the freight business.”

“It’s kind of put up or shut up time,” he said. If the STB finds a freight carrier it sees as viable, it would help broker either a sale or lease agreement “that works in our financial interest,” Mr. Moore said.

He said the railway has not been used for freight transportation “for a very long time, and not for passenger trains for over a year.”

After the Saratoga and North Creek railway ceased operations in 2018, the County put out a request for proposals seeking another entity to lease or purchase the line.

“Running on the banks of the Hudson River for more than 30 miles, this trail would delight as one of the loveliest public trail systems in New York, bringing people through scene after scene of wild natural beauty,” wrote Peter Bauer, executive director of Protect the Adirondacks.

“From bases in Saratoga Springs or North Creek, bicyclists and walkers, among other users, would enjoy a stunning trip with long unbroken sections at the north end.”

Mr. Bauer, as well as rail trail advocate Curtiss Austin of Chestertown, both said they welcome snowmobile use of the proposed rail-trail as well. “You want as much horsepower behind you as possible,” Mr. Austin said.

Mr. Bauer noted that ending freight use would also halt the possibility of oil tanker railcars being stored on the track, as happened briefly in 2017 and 2018. 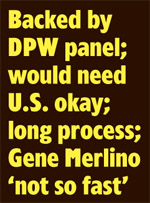 Lake Luzerne supervisor Gene Merlino and Warrensburg’s Kevin Geraghty cast “no” votes when the Public Works Committee urged the county to pursue abandonment of freight use of the rail line.

Mr. Geraghty cited protocol: “I just think we needed to get with Hamilton and Essex Counties” — and Corinth, to the south — whose rail lines connect with Warren County’s. “I think that is the proper way to do things,” he told The Chronicle.

Mr. Merlino’s objection is more substantive. “I’m against it,” he said, of moving forward toward a multi-use recreational trail.

“I still have hopes” that freight use will save the rail line and he’d rather the county pursue it than the federal Surface Transportation Board process.

Mr. Merlino said, “What’s another six months to look into it first?”

“I personally don’t want to rush into anything. It’s a big undertaking,” he said. “There are some who say we would make millions, and others say lose millions. We shouldn’t jump into a quick decision. Once it’s gone, it’s gone.”

Mr. Merlino pointed out that, while the Saratoga and North Creek Railway left owing “maybe 50 grand” to the county, “they gave over $600,000 to Warren County over the last six years, and they covered all the insurance costs and maintenance, the electrical. They did everything. Now we are the ones paying the upkeep.”

“Owning a railroad is a very expensive proposition,” Mr. Conover said, “now especially after the Halloween storm. We don’t even have a full inventory yet and we are looking at northwards of half a million dollars in repairs just from that. Since we own it, we are also liable.”

He said the county has applied for assistance through FEMA (the Federal Emergency Management Agency), if the storm is designated eligible.

Meanwhile, the board has initiated litigation against the Saratoga-North Creek line for outstanding payments still owed, Mr. Moore said.

The railway is used by snowmobilers in the wintertime, Mr. Conover said.

The county has deferred maintenance since rail operations halted, Mr. Moore said. “We will repair the line to make it safe for recreational users this winter.”

The State of New York, in conjunction with Iowa-Pacific, which owns a connecting line from North Creek to Tahawus, has applied for abandonment of that line, also with an eye toward conversion to a recreational trail that might connect both trails.

Even if officially abandoned as to freight, the Warren County railway could still be used for passenger trains, could continue hosting the hand-powered Revolution Rail passenger-pedaled trail riders, or the line could be converted for recreational uses.

Protect the Adirondacks’ Mr. Bauer’s lengthy statement said in part, “The possibilities and benefits of a new recreation trail from Saratoga Springs to North Creek and then possibly north to Newcomb are immense.

“Many businesses along the railway would spring up and this public recreation trail would be a shot in the arm for the towns and hamlets along the way. The idea of converting this rail line is an idea whose time has come. A transition will not be quick. This is a long-term investment to build a long-term asset for the region.”

Curtiss Austin, a retired General Electric metallurgist who moved to Chestertown to pursue a second career in photography, said he founded the Upper Hudson Rail Trail non-profit 10 years ago to advocate for such a project.

He said he first encountered such a rail-trail as a bicyclist when he lived outside Cincinnati, Ohio.

“I’m almost confident now, after 10 years, that this will happen,” he said.

“I do believe nearly all the supervisors are ready to ditch the railroad, but they are limited by the need to get federal acceptance.”

“You’d go from Saratoga Springs, a very happening place, and they have money there, and flow north where at the other end there is not even electricity. It is genuine sublime wilderness — and it is also the industrial history, of Tahawus and the Upper Works, a true ghost town, a little further up. And that is just a mile walk to the source of the Hudson River. I think that’s pretty amazing.”

He adds, “But you have to start somewhere and get your foot in the door.”

Mr. Austin said he welcomes snowmobile use of the proposed rail-trail as well.

“You want as much horsepower behind you as possible,” Mr. Austin said.