When Lindsay Corriveau graduated from Warrensburg High School in 2012, she had a pretty good sense that she might want to go into movie making, she says.

“My parents are both very artistic. I grew up dabbling in all of the arts, music, painting, theater,” Ms. Corriveau said.

Her parents are Beth and Jim. He is the music director at Warrensburg High School, and “a small local celebrity” for his singing and composing, Lindsay notes. 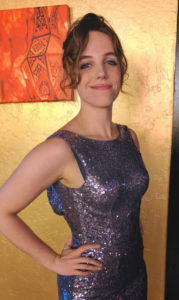 She says filmmaking appealed to her because “It incorporates pretty much all the art forms you can get, so it happened naturally.” She wound up double majoring in film and graphic arts — the only film major in her graduating class at Messiah College in Pennsylvania.

Her short film Oak Bones will be featured in the “Experimental Films” slot at the Adirondack Film Festival, on Friday and Saturday evenings, Oct. 20 and 21, at 190 Grille in Glens Falls.

“I was sort of a last minute entry,” Ms. Corriveau says. She only heard about the Adirondack Theatre Festival’s film fest late in the process, but, “It’s in my home town,” so she sent in her entry with an apologetic note, she says, “and they let me in.” 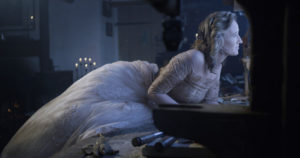 ‘Oak Bones’ — Short, fantastical film about a woman fashioned by an artist, who longs for freedom from her creator. Catherine Reid, pictured here, stars.

Oak Bones is an atmospheric, magical story about a carpenter who carves the perfect woman out of wood, bringing her to life — but then she longs for freedom from her creator.

Ms. Corriveau wrote and directed it.

She says, “There’s a lot to the film, what it means to be alive, the relationship an artist has with a project that becomes your child or your lover. There’s a thin line between what is sane and what is not.

“I wanted to do something fantastical and whimsical that also had real depth.”

It’s got a surreal feel to it, but with a more straightforward storyline than many experimental films, Ms. Corriveau suggests. There are cut-away scenes juxtaposing modern dance with the action, which she believes landed the movie in the “Experimental” category.

Oak Bones was originally meant to be a feature length movie called The Puppet Master, but a family crisis intervened. She scaled back the length of the film — but not its ambition, she says.

“I was the school’s only film major in that year. I had to represent. It felt important to go big.”

It matters, too, to “represent” as a female moviemaker, she adds. She is still hoping to make the longer version. The short itself has a sizable cast and crew — mostly volunteers “who worked very hard,” Ms. Corriveau notes. It has strong production values, in part because she had access to the college’s equipment. 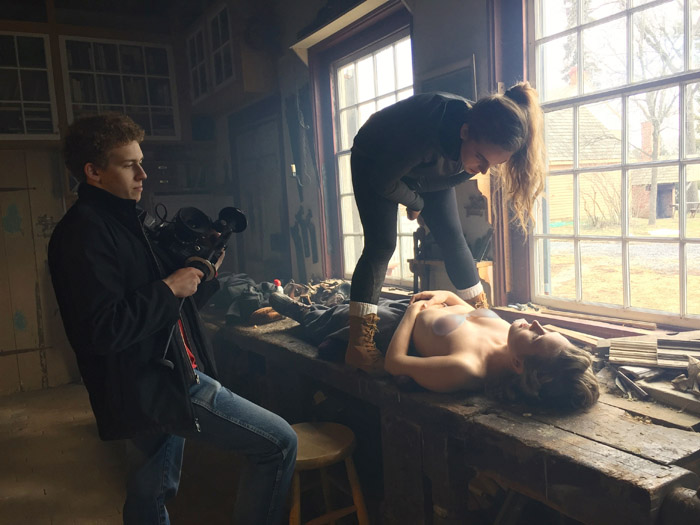 Filmmaker Lindsay Corriveau in action, on the set of Oak Bones.

Jim Corriveau did the score

Meanwhile, Ms. Corriveau has had several assistant directing jobs on movies since graduating, including one in New Zealand — but also spent much time on the final edit of this film.

She is now bringing Oak Bones to festivals around the country. The aim, she says, is to connect with potential producers.

She adds, “I hope, too — a lot of family and friends have been with this film, supporting us. Coming here is giving some people the chance to see it, not on their laptops, but in a theater, and to see how it compares with other films.

“It’s also good to feed off the rest of the audience, to see people’s reactions.

“I’m excited to meet the other artists and speakers. I’m 23. I still have a lot to learn from everybody else. To do it all from the comfort of your own home, is really nice.”