The Luxury Box, a sports simulator and mobile entertainment business, is now open on Route 9 in Queensbury.

The Chronicle tried it out.

What looks like a long building is actually a series of steel structures, each with a sports simulator setup inside — a large projector screen, sports simulator and equipment, plus recliner chairs.

Owner David Brindle said, “You can play golf, you can play baseball…hockey, you’ve got soccer, football, disc golf, bowling, and dodgeball.” He said you can also watch TV, sporting events and movies.

Mr. Brindle estimated the investment in a standard unit to be about $80,000, before furniture.

It’s located across from The Fun Spot, south of The Great Escape.

“It was just a wooded lot,” Mr. Brindle said. “We cleared the lot. And we own a steel company. So we’re the ones that manufactured the structures.”

Mr. Brindle is from Rhode Island originally, then moved to Long Island, where his wife is from, before they moved to Queensbury.

The steel structures containing the sports simulators are “all portable,” said Mr. Brindle. “It sits on a trailer frame…it all just folds up. It’s eight and a half feet wide. This one would be 35 feet long. You just hook it up to your truck and you’re going to pull it out.” 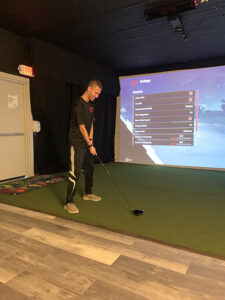 The simulators track whatever sport you’re playing. You actually hit/kick/throw the ball directly towards the screen, which projects the results, simulated on a course or field. Afterwards, you retrieve whatever ball you launched and take your next turn.

Golf is the big selling point, said Mr. Brindle. “The golf is phenomenal. There’s nowhere around here that you’re going to get a better experience with golf. I mean, literally, we’ve got thousands of courses. We’ve got different games that you can play” in the self-contained units.

He said they have software that “allows anybody in the world to design courses… That’s why there’s so many courses.”

He said “you can’t use Augusta because of proprietary licensing reasons. But they have Augusta in here.”

The Chronicle’s group played golf first, on the Augusta knock off — which is called “Firethorn National.”

We had a bit of a learning curve for a group of admittedly mediocre golfers. It’s disorienting to pull out a driver and blast it into a screen in front of you — it feels unnatural at first.

We spent a few rounds in the water, but everyone had fun and we began to get the hang of it after a few holes.

We used the Luxury Box’s clubs, but they say the norm is for guests to bring their own.

The simulator has an optional “auto-putt” feature — at a certain distance from the hole, the shot counts regardless. It was useful to keep the pace up and avoid frustration.

Our highlight? Frisbee golf. We found it light and fun, and the tracking of tosses to be very accurate.

Soccer penalty kicks were a hit, too.

Afterwards, someone in our group texted, “A big plus is the variety of games that can be played. Most simulators like that are designed to be good at one thing.”

A standard room rents for $40 an hour, regardless of how many people use it. The larger “luxury” suite, which has an extra room with real-life games like pool, foosball and darts, rents for $90 an hour.

It’s touted for parties or a fantasy football draft.

Mr. Brindle said the recliners in the back of the room are ideal for watching movies, sports or TV on the big screen.

Mr. Brindle said they have an in-depth simulator, specifically designed for golf teaching professionals. “You’ve got 3D visions of the person there, you could go all the way around, turn the person upside down — not that you would want to do that, but you can do it.”

Mr. Brindle showed it off — after he drove the ball, the screen immediately showed an animated silhouette of him swinging, coupled with statistics about the swing, like ball velocity and angle.

He said they’re planning an open house for golf pros to test out the equipment.

For example, as your ball is rolling, a line will follow it, showing its path. It will also replay your swing, so you can see exactly how you hit the ball.

The putting green also has games — like tic tac toe and beer pong. The “cups” are projected on the ground, and you try to putt the ball in. If the projector detects you hit a cup, it takes one away.

Mr. Brindle said the room is still being configured, so there were some technical difficulties.

He said the idea for The Luxury Box “was hatched back in 2004. I’m a big sports person. I saw that there were golf simulators. I was like, Oh, that’s pretty neat. So I did some research into them.

“And then I just talked to some of the manufacturers and they all said, Oh, if we had a structure, or if the people had a bigger room, then we could sell more of these things. Like oh, well, there’s a problem. So let’s solve it.”