Brayden Dock, 15, is headed back to Augusta. 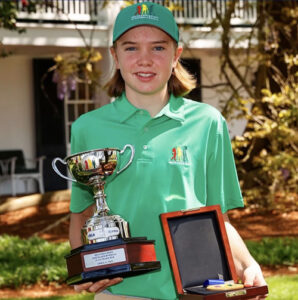 Next April 3, for the second straight year, the 10th grader at Glens Falls High School will compete in the Drive, Chip and Putt National Finals at Augusta National Golf Club, home of The Masters.

“I feel very honored to be able to even hit a golf ball at Augusta knowing that the best players in the world once hit there, and played there, and spent their time there,” Brayden told The Chronicle.

Brayden qualified in the Boys 14-15 year old division by winning the TPC River Highlands regional qualifier in Connecticut. His father, Glens Falls High School teacher Jeffrey Dock, said Brayden had the most qualifying points of all 10 regionals in his age group.

Brayden said it’s “going to be a little easier to prepare now that I know what it’s like this year.”

In April, Brayden said, “I came second. And I won the putting portion. I made the 15 footer. So I’ll see if I can do that again.” 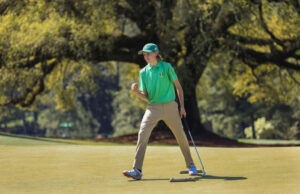 The first time he qualified, Covid disrupted things. He had to wait from September 2019 “all the way to the beginning of April this year. So it was a long wait.”

But, he said. “That extra year gave me time to adapt and feel a little more comfortable with my swing and my putting stroke…I also got a little bigger, I was able to hit a little further.”

Before competing this past April, he trained at Anders Mattson’s indoors golf facility in Saratoga Springs.

Is the competition intense? “It’s a little stressful. The nerves are a-going,” said Braden. “I just try to breathe, more than anything. I just take deep breaths and just try to do my best, I guess. I just try to think of it as another shot as if no one was watching.”

Braden had plenty of practice in a jam packed summer. “Basically every week,” he said. “I just packed a suitcase, I’d have my tournament, I’d come home for two days, pack another suitcase head out for another tournament.

“August was just packed with tournaments, all four weekends and into the week,” he added. But now, “I don’t have any other events that I know of unless I go down to Florida this winter.”

Brayden said his favorite golfer is “Justin Thomas,” though he adds, “I think I’ve had a different answer for everybody. At this point now, it’s probably covered every golfer.” 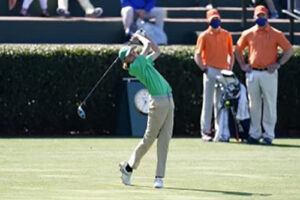 Brayden said when Thomas was young, “he was a shorter hitter and he’d always have to hit woods into greens on par fours and I was just the same way…and he also came up to me and congratulated me when we were there last year, so that was pretty cool.”

What’s next for Brayden’s golf career? “I hope to perform well this upcoming summer [2022] in some bigger events like AJGA stuff and then from there hopefully get into a pretty good college, D1. And then potentially go pro, but we’ll have to see. I’ve just got to keep on putting the work in and I’ll see results.”

His greatest accomplishment? “Before, I would say the Drive, Chip and Putt. But this year I did go undefeated in all of high school golf [for Glens Falls], which was pretty cool. And I guess it hasn’t happened at my school before so I guess I broke a record for that. And I broke lowest average scoring record which was pretty cool.

“But it’s kind of hard now because I just made it back to Augusta again,” he added. 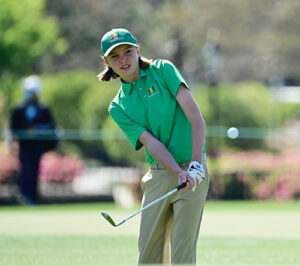 Brayden already sounds like a pro, adding, “I’ve just got to thank the Drive, Chip, Putt organization and the Masters organization just to be able to put this event on for kids at a such a young age too, just to be able to experience what it’s like to be on national television and play at the best level of golf. I think it’s very, very cool that they’re able to do this.”