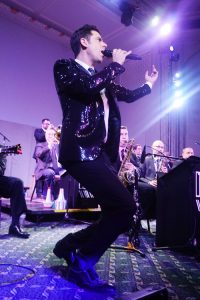 Number-one is Blue World by the pioneering saxophonist John Coltrane, who died in 1967.

Number-two is Halloween perennial It’s the Great Pumpkin, Charlie Brown by Vince Guaraldi. It dates from 1966.

When Tony and Tedd performed their two sold-out concerts at Hudson Falls’s Strand Theatre on Oct. 19 and 20, Tony told the crowd that CD sales have fallen so precipitously that sales at an event like the Strand concert can propel an album to the top of the Billboard chart.

His sales pitch worked. A line of enthusiastic audience members after the shows bought CD’s that Tony autographed — and it evidently catapulted Lush Life into the week’s upper echelon.