To merge or not to merge? FE, SGF schools face decision 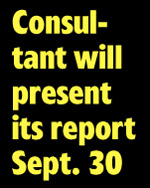 Links for virtual participation were still to be posted on the schools’ Websites at Chronicle press-time.

The consultant, Castallo & Silky, will report on its merger or annexation study, considering staffing and financial impacts as well as possible building and classroom configurations.

Fort Edward is operating under a contingency budget after voters twice rejected the one proposed. The district has a diminishing tax base and is dealing with program cuts and staff departures.

Ms. Orr said state incentives could be as much as $50 million over 14 years, plus 98 percent funding of capital projects during that time period.

“We welcome any opportunity to increase our revenue source,” Ms. Orr said. “It’s a matter of how does that work for us.”

She said, “We want this to benefit Fort Edward, but we also want it to benefit the students of South Glens Falls and the community.”

But it looms very large in Fort Edward.

“It’s very divided,” said school board president Mr. Roche. “One indicator is, the last two budget votes, half the folks want to save the school and keep it going, and the other half believe the taxes are too high.”

With the budget voted down, the district must hold to last year’s numbers, even as costs increase, he notes, and there are certain other requirements, such as charging the public for building use.

“We are going to fight for that school as long as we can,” said Mr. Roche. “We will look at as many options as we can and then put it into the hands of the people. We are looking for the best outcome for our students and our community, the taxpayers.”

He notes, “Fort Edward has lost millions of dollars in property valuation,” particularly with the loss of General Electric. “Actually, our budget has stayed in line, but the burden has been shifted so much onto the taxpayer…

“We’ve cut so many sports and the arts, counselors, so many teachers already. The 20 percent that the state is withholding [in school funding] is further exacerbating our problem. All we can do is try and make sure we are making the best decisions for the district.”

The school is losing staff. “Some are seeing the writing on the wall,” Mr. Roche believes. Elementary principal Karen Jones departed after her position was eliminated and she was reassigned to teaching duties in the High School.

Sam Ratti, the middle-high school principal, whose position was expanded to oversee the full district, K to 12, will leave next month to be principal at Northville High School. The district has posted to fill that position, Mr. Roche said.

“These are great people. It’s such a loss,” Mr. Roche said. “I understand it. We have had some teachers leave as well. You can’t blame them.”

Mr. Roche says, “We have to consider the parents and the families, but also the taxpayers, and people living on a fixed income. We have also been lobbying the state for additional support, which has bridged the gap, but that can’t go forever.”

A dream solution? “We would love for Amazon to come in and build a distribution center at the GE dewatering plant,” Mr. Roche says. “Without the revenue, it’s difficult.”

The Fort Edward Booster Club, and a new group called Families for Fort Edward have stepped in to help raise funds.

A recent basket raffle raised “over $19,000,” Mr. Roche reports. “That is money for arts, and sports, if sports do get started.” He said the district needs $100,000 to fund its athletics program, currently on hold.

Mr. Roche says, “I would hate for, when sports are allowed, for our students to be kept off the playing fields because of budget.”

He said, “The groups have raised over $20,000 toward that goal. In a district where all students qualify for free lunch, to see people come together and raise this money — it’s a great act of support.”

“People care about their school, “Mr. Roche said. “One thing we have talked about is keeping our building as an elementary school for the next several years, so the little ones can still go in the community.”

He adds, “Some South Glens Falls students may benefit too, if they live closer to here.”

South Glens Falls Superintendent Ms. Orr said that so far there is “not much” sentiment in her district about a merger.

Now that consultant Castallo & Silky is providing its report on the possible annexation of Fort Edward’s school by the South Glens Falls School District, the schools are seeking applicants for a merger study committee.

“The committee is going to be a big component of this process,” South Glens Falls Superintendent Kristine Orr told The Chronicle.

It will include 13 people from each district — six community members, four teachers, two staff and one administrator. Applications are due by Oct. 9.

The committee will meet through this school year. A final draft report review is planned on April 12.

The time line envisions possible referendum votes in December 2021 and February 2022. A merged district could begin to operate as soon as July 2022.

A merger, or in this case annexation, will require two separate positive votes in each district.

The Glens Falls and South Glens Falls school districts have joined forces to create a joint “virtual academy” to serve the students in grades K-5 who have opted to go fully remote during this school year of the coronavirus.

Elementary students in school in-person attend every day. There’s a hybrid model for grades 6 to 12.

“In order for us to do this at the elementary level,” Ms. Orr said, “we decided to partner to do a separate completely virtual program. We knew it would be hard for the principal of one building to manage all these staff and families.

“We took one administrator, Jerilyn Stellato, who is overseeing the staffing and organization of it.” She is officially principal of the virtual school.

Share
Previous In 1978, what Ed Bartholomew said on his first day as GF Mayor
Next Makeover at Massie’s