A Hudson Falls power equipment dealer is buying Maxwell’s Pub on Main Street looking to assure it remains a restaurant.

Tim Havens, who owns the Falls Farm & Garden power equipment business on Dix Avenue in Hudson Falls, is under contract to buy Maxwell’s, which adjoins the revived Strand Theater.

Long-time operator Pete Brown has had the pub for sale for three years. Finally this spring, a buyer emerged.

Mr. Havens told The Chronicle he stepped in because “I heard who was gonna buy it. It was all over town.”

Mr. Havens said the fear was he “was not gonna keep it in keeping with what it is” — but rather turn it into a hard-edged bar. 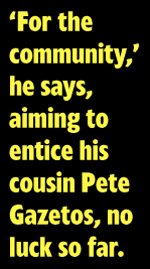 He says the prospective buyer had a handshake deal but “hadn’t put down a deposit. I made him [Mr. Brown] an offer. He accepted. I put a deposit on it.

“A handshake is good in some things but not when you’re buying real estate. I put a check down for $10,000.”

The purchase is set to close in June.

“I’m doing it for my community,” says Mr. Havens. “I’m the only Greek you’re ever gonna meet who doesn’t want to be in the restaurant business.”

The Greek heritage is relevant to Mr. Havens’s plan.

“My cousin’s the New Way Lunch,” he says, referring to Peter Gazetos. (The mothers of Mr. Gazetos and Mr. Havens were sisters.)

The Gazetos family has, literally, 100 years of local restaurant experience. They own the hot dog-centered New Way Lunch, which now operates in Glens Falls, Queensbury and Warrensburg.

Mr. Havens aims to entice them to add Maxwell’s, not for hot dogs but as the full-scale lunch and dinner restaurant with a bar that it is now. Even before Mr. Havens signed the deal to buy Maxwell’s, he says, “I took him [cousin Peter] down there. I took him all through the theater, through the Masonic Temple.” Both buildings are seeing grass roots revival efforts.

Mr. Havens and his wife Jane have been active in the Strand revival. He says, “I’ve put money into it and I’m a cheap bastard.”

“I whole-heartedly believe in that theater. I know a good thing. We are so blessed to have Jonathan Newell, with his contacts and enthusiasm — and the enthusiasm of all these volunteers and the concerts they’ve brought in.”

He says of Hudson Falls, “It ain’t healed totally but it’s come back a long way. You see the enthusiasm. I’m confident that the right thing will occur.”

Mr. Gazetos, reached Monday for comment, told The Chronicle that he, his wife Susan and their children Nick and (new mother) Ali are already stretched thin operating three restaurants. He indicated Maxwell’s Pub is not in their plans. 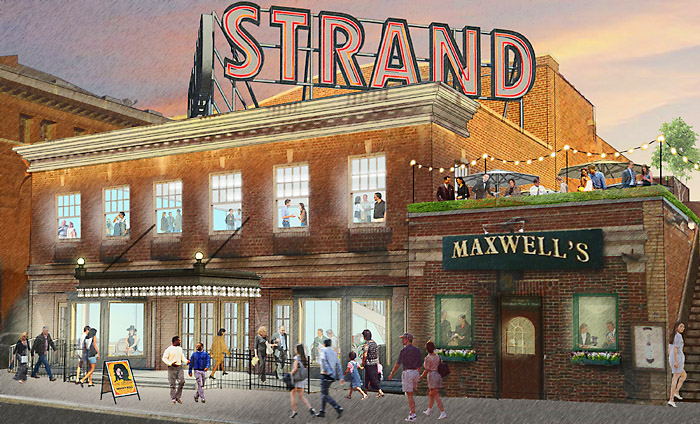 The reality hasn’t (yet) fulfilled this idealized artist rendering, but the Strand Theater and Maxwell’s Pub do operate on Main Street in Hudson Falls.

Mr. Havens figures to persist. He notes that Ali’s husband Frank Mineo had planned to operate gaslight restaurant in the former Bistro Tallulah space in Glens Falls, before that project fell through. Now Mr. Mineo is pursuing a restaurant project in Lake George. Mr. Havens says it will be seasonal and he still holds out hope.

If the family connection doesn’t pan out, he said he’ll keep seeking lessees. He said a husband and wife team would be great.

He says the community is eager for Maxwell’s to survive — that “250 people” have told him “thank you for buying it.”

“It’s been a wonderful 18 years,” says Maxwell’s owner Mr. Brown, who will continue to operate the pub until June.

He insisted on crediting “so many people,” starting with Bill “Spanky” Collier. “I would never have opened if wasn’t for him. He helped me with all the renovations — and he never took a penny from me.”

From “my first chef” Mike Pauquette to “my last chef” Michael Hoffman, Mr. Brown credited them and many others.

He singled out Cynthia Cronin Sawyer, “who’s been with me since day one. I could never have done it without her,” and “bartender and waitress Laura LaMarche.”

He thanked the community and his customers. “A lot of these people are still gonna be my close friends,” he said.

Mr. Brown said operating his own business was more than a full-time job, but that it enabled him to take time off and attend his daughter’s softball games.

He said his greatest satisfaction from operating Maxwell’s Pub “is what I could give back to the community.”

The restaurant sponsored “so many girls’ softball teams,” and the annual Maxwell’s Pub golf tournament. “I raised $75,000 for the little kids in this community. That golf tournament brought me the most joy.”