Environmental groups have launched an effort to enact a law to ban ATVs — All-Terrain Vehicles — from all state land, including the 6-million-acre Adirondack Park.

ATVs are already prohibited on Forest Preserve land by the Department of Environmental Conservation, but advocates of new legislation say there aren’t enough Forest Rangers to enforce current laws and some ATV operators ignore the restrictions because penalties aren’t harsh enough.

“Illegal ATV use is a continuing scourge across the public Forest Preserve in the Adirondacks,” Peter Bauer, executive director of Protect the Adirondacks, was quoted in an April 8 joint press release.

“These machines destroy hiking and snowmobile trails. They cause extensive damage to soils and wetlands…These machines are marketed for wild riding to make the mud fly and to chew up the forest. The State…needs to pass legislation that protects public and private lands from ATV damage.”

Willie Janeway, executive director of the Adirondack Council, which issued the release, said, “What is needed is a law that makes it clear that ATVs are not allowed on public lands, with very few exceptions.”

There’s resistance to the drive.

“The Adirondacks are big enough to have room for everyone,” contends Jon Wood, president of the 250-member Foothills ATV Riders club based in Hartford. He said, “I believe everyone should have an equal right to use public land. ATV owners are providing the state with sales tax and registration fees…and we’re paying money for nothing right now.” 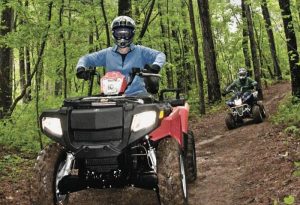 Warrensburg Town Supervisor Kevin Geraghty says, “I don’t want ATVs tearing up trails, but hikers are tearing up trails, too. They are closing hiking trails in the High Peaks. I don’t believe [misuse of ATVs] is a huge issue here. I don’t see a lot of cases in our town court.”

Simpson: Come up with compromise

Horicon Town Supervisor Matt Simpson said when trails in the High Peaks were being damaged by hikers, “we didn’t ban hikers. We sat around the table and came up with a compromise. And there’s a lack of Forest Rangers because they are so busy rescuing all the hikers!”

Mr. Simpson added, “I don’t think there need to more laws. Maine and New Hampshire have developed ATV trails and monitor them. It can be done here.”

“I’m in favor of a mud season where the state goes in and says on these approved trails, you can’t enter before April 15th, or May 1st, and posts it. And there’s a serious fine for those who violate the rules.

“I think there’s room for everybody. It has to be well thought-out and planned, but New Hampshire has a trail system — Vermont does too — that a lot of my customers go to. They have lean-tos out in the woods. They manage the trails, and violators are subject to heavy fines.

“The Adirondacks are a wonderful place that no one wants to see destroyed by ATVs or anything else. Under proper supervision, there’s no reason it can’t work. To just say no one is allowed is not the answer.”

Assemblyman Dan Stec, an avid hiker and an Adirondack 46er, said the sprawling Adirondack Park “is owned by all New York State residents, not just ATV enthusiasts or hikers or cross-country skiers. I’ve always advocated for finding a way for everyone to have something, somewhere, that could be managed, and still protect the Adirondacks.

“We have promoted the Adirondacks and more and more people are getting out in the woods, which is a good thing, but now we have to have a plan to manage the increased use, and that may include additional staffing of Forest Rangers.

“We want people to come here…it’s an investment we need to make.”

Assemblywoman Carrier Woerner had not responded to an e-mail by press time.

Mr. Janeway of the Adirondack Council is quoted, “Each Ranger is now responsible for patrolling more than 50,000 acres of land, more than twice the amount they patrolled in the 1970s.

“The illegal use of ATVs on state lands is frequent, difficult to prevent, and presents significant enforcement issues. The Legislature needs to help deter ATV misuse.”

Former Chester Town Supervisor Fred Monroe, who led the Adirondack Park Local Government Review Board for years and is now its communications director, says the proposal “appears to be an all-out assault” on “the many thousands of New Yorkers who enjoy riding ATVs…We are strongly opposed.”

He said, “The state now also owns more than 850,000 acres of conservation easements on private lands that are still managed for forestry. Those lands have currently used logging roads that have the carrying capacity and are well suited for ATV rider use.”

Betty Little: Use of logging trails

State Senator Betty Little agrees, saying much of the land with conservation easements is “full of logging trails that definitely could be developed.”

She says a class for new forest rangers is underway, and she favors increasing the penalties for riding ATVs on land where it’s prohibited.

“Usually it’s just a few who give a bad reputation to everyone,” she said. “If the penalties were stricter and these people were fined more money for damaging trails, I think it would make a difference.”

“While there was a balance of power between the two parties in the Legislature, we pressed for the past five years to craft a compromise that would have given the ATV lobby its wish of removing the current 1,000-pound limit on ATVs. It’s not possible now to obtain a DMV registration and license plate to ride off-road vehicles over 1,000 pounds public trails/roads.

“The compromise would have allowed UTVs — more like a dune buggy or golf cart on steroids — to be registered for use on public trail systems where ATVs are allowed — such as those in Lewis County, outside of the Adirondack Park; or on timberlands inside the park where the state owns recreational rights and has negotiated public ATV access with the private landowner).

“The ATV lobbyists rejected that compromise and walked away from the talks.”

Fred Monroe, communications director and former executive director of the Adirondack Park Local Government Review Board, has a different take.

“I was involved in some of the lobbying,” he said. “‘Greens’ have been holding UTV registration hostage to their attempts to get an ATV ban law. New York is the only state in the U.S. where you can’t register a UTV.”

Mr. Sheehan responded, “Hostage is a strong word. We opposed it because — without new controls — authorizing a size increase promised only additional damage to public lands from heavier vehicles.

“Compromise requires both sides to give something. So far, the Forest Preserve has done all of the giving. It belongs to 19.5 million people, not just the fortunate few who own recreational vehicles and want to use them on public lands.” 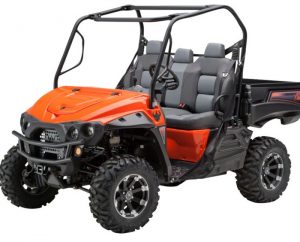 Adirondack Park Local Government Review Board executive director Jerry Delaney responded, “The forest preserve has given up nothing. The only users allowed on Forest Preserve are CP-3 permits. These are people with documented medical issues that prevent them from walking very far. They are in DEC designated areas only.

“Currently there are no trails on forest preserve, so John’s comment is misleading at best. The truth is sometimes hard to defend against, so deflection, and misdirection are what people resort to when nothing else works. Many people all over this State would like to register their UTV’s. This is not just an Adirondack issue.”