“When we started growing mushrooms and everything, it was mostly just for growing our own food,” says Jaryn. “Like we had a vegetable garden, we foraged for wild mushrooms. And that’s kind of how I got into all this. And, you know, wanting to have more than what we could find in the wild. And once I started growing them, I was like, wow…I’m good at it.”

Now they grow mushrooms in a 1,000 square foot outbuilding where they live on Route 9N in Greenfield south of Corinth. They also keep chickens, ducks and turkeys.

“We started selling to friends and family, and then picked up a couple chefs, and we started at the Greenfield farmers market and then the Glens Falls farmers market,” Jaryn said.

“It really shifted last year with COVID hitting and everything. We went from…a lot of regulars at Glens Falls Farmers Market…And then I’ve got, you know, chefs like AJ at [Farmacy], and Alex and Michelle down at Hamlet and Ghost in Saratoga. We worked with a few others. And when COVID hit, it really shut down all the chefs. So our whole wholesale outlet just stopped.

“And so we’re like, alright, we can’t really stop the mushrooms from growing, they grow really fast….So if you just stop production, not only does it hurt you next week, but it hurts you a month down the line…”

“We just started making Facebook posts and asking friends to share stuff. And it blew up, we ended up doing deliveries like crazy. I want to say we sold a little bit less as far as our overall volume. But we ended up doing more overall sales because we weren’t selling at that wholesale price.”

The Chronicle asked about ‘magic mushrooms.’ Jaryn said, “We get this question all the time…and it’s one of those things that we put on our sign at the market now. Like, No, we do not sell magic mushrooms!

“I try to laugh it off a lot of the time, but it can be kind of frustrating….You’re not going down to the vegetable stand and asking for ‘weed’, you know!” 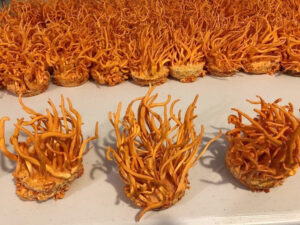 He said their biggest selling mushroom is the Blue Oyster. They also grow Lion’s Mane, Enoki, Cordyceps Militaris and more. He said the Cordyceps is a particularly expensive specialty, commonly used in countries like China for its medicinal benefits. It costs about $80 per ounce.

Savannah also works as a nurse at Glens Falls Hospital. “Over the years it has definitely been hard…However, Jaryn and I have finally begun to find a perfect balance. I’d be lying if I said this whole process wasn’t overwhelming from the very beginning. Luckily we’ve had each other to rely on, which sounds cheesy, but it’s true.”

Jaryn says there’s a camaraderie among mushroom people. “A lot of industries, I feel like it’s kind of cutthroat and everybody’s very protective of their information.”

“But the product we grow doesn’t travel very well. Like you grow, for example, the oyster mushrooms, they only have like a week shelf life, they really start going downhill. So that doesn’t really allow for massive farms to have a hub and ship countrywide. They do, but you don’t get that same fresh product.

“When you walk into…a chef with a box of fresh product. It’s something they haven’t seen before. And because of that, all of the mushroom growers across the country kind of work with each other…and kinda progress the industry together.”

Jaryn’s interest in mushrooms began after encountering them while bow hunting.

He has mentors, but he learned a lot via the Internet. “Random Facebook groups, there’s a lot of weird mushroom identification groups…and mushroom growing forums, kind of thing.”

Jaryn refers to the outbuilding as a lab. It feels sterile — sealed plastic bags, large refrigerators and a HEPA filter that “blows 99.99% clean air down to .3 microns.”

He said the mushroom growth process can takes weeks to months.

First, they use “hardwood sawdust and wheat bran, or occasionally beet pulp,” and a steamer to create “little mini logs.”

Then, they essentially clone mushrooms, inserting genetic material into the logs, and placing them in bags at 99% humidity in a dark room.

“Eventually, they’ll all…turn white,” said Jaryn. “When you want to initiate fruiting…you simulate like a crack in the bark or an insect boring in,” by piercing the block with a scalpel. Mushrooms erupt from the logs through any opening they can find. It looks alien. “They double in size every day,” Jaryn boasted.

It’s a meticulous process. Bringing in bacteria or failing to sterilize can have a domino effect of consequences.

Savannah said, “We joke all the time how it’s funny that mushrooms can grow with no problem in the wild, but we give them the perfect conditions in a room and sometimes we struggle to make them grow perfectly.”

Jaryn said, “You could lose, you know, 100 proving boxes in a week, just because you sneezed in the lab or something. It just takes one week to put you down four or five grand.”

Is there a lot of money to be made in mushrooms? “So, on paper? Yeah, absolutely,” Jaryn said. “I feel like that’s why a lot of people get into it is, your overhead costs tend to be pretty low once you’re established…Once it’s all said and done, all it really costs me is my materials and bags…a lot of those things you can source locally for next to nothing.”

But Jaryn stressed that it’s hard work. “I mean, for me, it’s a full-time job…The birds don’t let us sleep in much. So we’re both up around five o’clock.”

He doesn’t want to expand too fast.

“I’m not sure that I really want to expand much more beyond this, because once I do, it’ll be very heavily employee driven, whereas right now I’m able to manage most of it.”

Share
Previous Big doings at Strand Theatre in Hudson Falls
Next LG: Boat conked out; on to rocks; our fate