The handsomely revived Strand Theatre on Main Street in Hudson Falls is overachieving as usual.

On Tuesday, July 20, they’ll screen the initial episode of Hudson Falls, an aspiring TV series. Strand executive director Jonathan Newell notes that it was titled “Hudson Falls” even before they knew the place actually existed, but the Strand parlayed it into a showing that will bring some cast and crew members to Hudson Falls for a reception, screening and more. Cost: $25 — which all goes to benefit the Strand.

On Sunday, July 25, musician/producer Peter Asher — who turned people like James Taylor and Linda Ronstadt into megastars and was himself half of the duo Peter & Gordon — 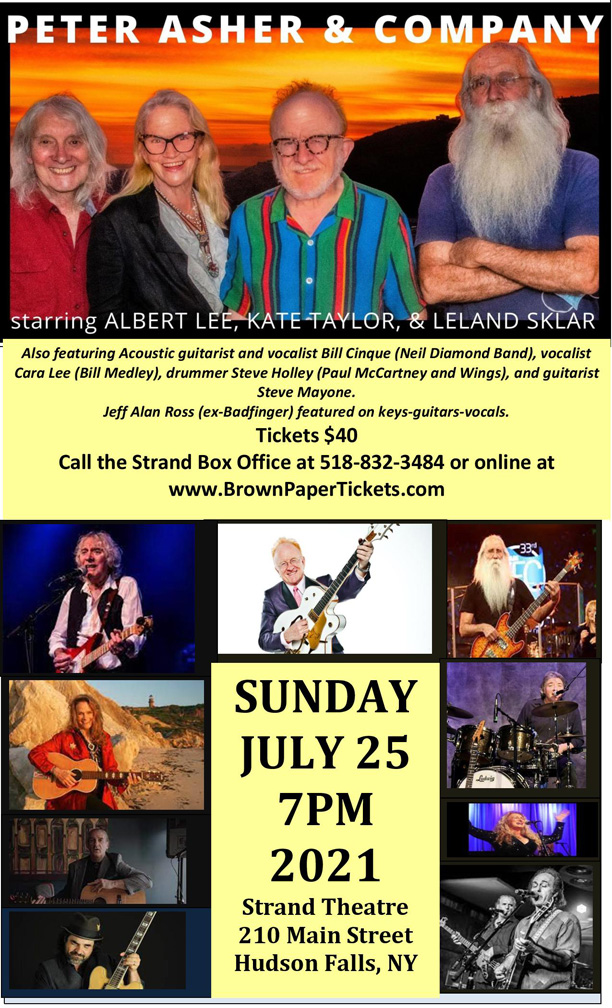 Richard Kind, star of TV pilot ‘Hudson Falls,’ on his ‘modicum of fame’

Richard Kind plays a rumpled detective along the lines of 1960s TV private eye Philip Marlowe in a hopeful new television series called Hudson Falls that will have its premiere — here, in Hudson Falls, at the Strand Theatre — on Tuesday evening, July 20.

Mr. Kind, you will recognize from TV classics Spin City or Mad About You, Curb Your Enthusiasm or Scrubs, among others.

“When I walk down the street people know me” from all these different places, Mr. Kind said in a phone interview with The Chronicle.

“How you know me matters who you are and the medium you follow,” Mr. Kind says.

Maybe that’s from movies such as Argo and A Serious Man, or HBO’s Luck, or as the voice of invisible friend Bing Bong in the Disney/Pixar animation Inside Out.

Of Bing Bong he adds, “I like to think, it’s not humble, but I am the Jiminy Cricket of that generation.”

While cast and crew will be at the Strand on Tuesday for a Q&A after the Hudson Falls screening, Mr. Kind regrets, “I was already signed up to do a charity event.”

He admits, “I don’t even know which. I have a modicum of celebrity, and so some people are willing to pay large amounts to one charity or another to play golf with me. I play well enough, for a guy who looks like me.”

Somewhat charmingly oblivious, Mr. Kind says when asked about the great lengths his producers went to for Covid safety while filming Hudson Falls, “I wasn’t really aware of that.”

He does recall, because the crew was so small, producer-director-writer Elias Plagianos did double duty, directing and as the “focus puller” — who assures the lens stays focused when the camera pulls back or actors move. “So, I had to move very slowly sometimes. That made me laugh.”

‘Are you near Williamstown?’

Like everyone else involved — including writer Elias Plagianos, Mr. Kind had no idea there was a real place named Hudson Falls when they were filming. Mr. Plagianos told The Chronicle he made up the name to account for a waterfall in one of the scenes, and to place the story “upstate.”

Mr. Kind wanted to know if we were anywhere near Williamstown, Mass. — home of a high-profile summer theater festival and the greatest stretch he could imagine for a place so far out of New York City.

With the shut-down, Mr. Kind brought along his 15-year-old son, Max, and they put him to work for the eight-day shoot. “He carried juice for the actors, moved lights. He saw what I do, up close this time, and now he has his own IMDb page,” referring to the online database of TV and film, cast and crew credits.

“Elias was very kind. He bonded with my son over comic books.”

The episode was accepted to be aired online on Amazon Prime, but Mr. Plagianos said, with success they’ve seen at some festivals, they’re waiting to see if it get picks up by a major player such as Netflix, first.

Mr. Kind says he’s hopeful the pilot will succeed and the show gets picked, for several reasons he listed:

“Elias is a very talented writer and director. As a script, it’s very well written.

“I don’t know where it’s going to go, what the next episodes would bring. I would like to find out.

“I like the character and I like the writing. You don’t always get both. It would be nice to see it do well. America doesn’t always clamor for quality.”

Life of a character actor

He says, I always wanted to play a detective. Not James Bond or Maddox, just a guy who gets hired out for cases, sort of a schlubby guy, but who’s smarter than the average. Does he even carry a gun? I doubt it. So, I didn’t have to be a rough and tumble kind of guy.”

He says, “As a character actor I say yes to about 99 percent of the things I’m asked to do.”

“This one was very different and fun from what I usually get to do, and it was the very first job I had since — I know, it was March 12. I was working on The Goldbergs in Los Angeles, and flew home early” — to the Upper West Side in New York City — “and I didn’t work again until we shot this in July.”

Mr. Kind says he always wanted to act, though he was expected to take over the family jewelry store his father ran in Princeton, New Jersey.

His first role? “Fagin, in Oliver, in the fifth grade.”

He says, “Everybody wants to be a rock star, a baseball player or actor when they’re a kid. I was too stupid to give it up.

Of course, presumably, he is neither.

“I have a modicum of fame,” Mr. Kind defers. “A lot of people now respect me. I’m very lucky. I look at Adam West or Carroll O’Connor (respectively, Batman, and Archie Bunker in All in the Family). Those were heroes of mine. They didn’t want to be trapped in their roles.”

That’s a fate he’s avoided with his long list of character parts.

Mr. Kind says “At one time this thing was my dream. Then it became a job, and them the dream came true without me knowing it.”

Cast and crew members will be at hand for the preview-slash-premiere screening on Tuesday, July 20, for a TV serial pilot called Hudson Falls that its producers are hopeful will be picked up for wide distribution on a larger platform such as Netflix.

The program starts at 6:30 p.m. with a wine and cheese reception, followed by the TV screening and Q&A with select cast and crew members.

Admission is by $25 donation to the Strand Theatre. RSVP: 8323484, or at www.mystrandtheatre.org.

Character actor Richard Kind (see left) stars as a rumpled detective who takes what appears to be a mundane gig in a small upstate town, with hopes to reconnect with his ex-wife who lives there. She’s played by Jessica Hecht, another familiar face from Friends, the Netflix series “Special” and more.

Other recognizable and accomplished cast members he noted include William Sadler, Robert John Burke and Tara Westwood, who also produced.

The evening also includes screening of a short film called Distemper, another project of Mr. Plagianos and actress-producer Tara Westwood. It stars Abigail Hawk in the true story of pioneering 1920s scientist and LGBT icon who discovered the cure for African Sleeping Sickness.

Mr. Plagianos says theirs was the first pilot filmed during Covid, last July, near his home in Rockwell Falls, under strict protocals with minimal cast and crew.

It’s a bit of a puzzle to be unwound, he said, figuring out how scenes were shot with social distancing, using camera angles for example to create the illusion that the characters were close.

Producer/actor Tara Westwood recalls doing double duty: “The director would yell ‘Cut’ from our scene and I’d reach into my back pocket to pull out a brush to do Richard’s face.” Cast members did their own makeup and wardrobe, she said (other than Mr. Kind). — C. DeDe