Finch Paper president and CEO Deba Mukherjee told The Chronicle (in August): “Maybe it’s time to give you an update on us. I’ve been here since 2013, and over the last six …

END_OF_DOCUMENT_TOKEN_TO_BE_REPLACED 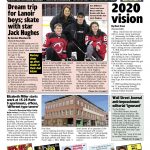 END_OF_DOCUMENT_TOKEN_TO_BE_REPLACED

Our office is located
in downtown Glens Falls
half a block north of the traffic circle
at 15 Ridge Street (Route 9L).
Open 9 a.m. to 5 p.m. weekdays.

Sign up here to receive the digital version of The Chronicle.

Note: If you have ad-blocking software installed on your browser, you may not be able to view Chronicle promotions on this page. Don't miss out!