Summer trip? They went to Alaska!

Kurt and Meghan Theis of South Glens Falls, sons Evan (9) and Henry (7) and members of their extended family took a bucket-list trip this summer — to Alaska. 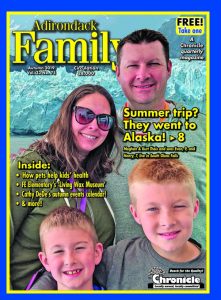 “The fact that we could all take this trip together was amazing. It was truly the trip of a lifetime,” said Kurt, who works at The Chronicle as a graphic designer.

“It was beautiful, educational, and filled with incredible views and wildlife. We obviously come from an area where there are mountains, but in Alaska…they have endless mountains and we were fascinated by how much of the land up there that has not been developed and remains truly untouched and is forever wild.”

Meghan, who teaches reading at Fort Ann Elementary, said, “I was very nervous going into the trip, but it turned out better than I could have imagined. We were on a bus tour through Denali for eight hours, and I was nervous it might be a little too long for the boys, but it was awesome, and our bus driver gave them the job of watching for wildlife, which they loved.

“The fact that all of us were able to have this cool experience for the first time together was pretty amazing.”

Evan, 9, who is going into fourth grade, says, “We got to see a lot of wildlife that we would never see here, like we saw a moose. There are no moose in the City of Glens Falls. We saw caribou. I wanted to see a bald eagle, and we saw a lot of them. We also saw a golden eagle, which was cool. And I liked seeing the bears.”

Henry, 7, who is going into second grade, said, “I really liked looking out the window on the boat and sitting on the deck and watching the glaciers fall. One night we were eating dinner and saw some whales. And there was a pool on the ship and so much to do.”

Also on the trip were Meghan’s parents Frank and Cindy Hogan; Cindy’s sister Pam Guyette and Patty Anderson, one of Cindy’s closest friends; and Meghan’s sister Caitlin Hogan Morgan and her husband Scott.

Kurt said his in-laws planned the trip with Julie Humphries of AAA Northway Travel. “It’s been my mother-in-law’s dream trip for years. My father-in-law says it was a gift for the 12th anniversary of her 50th birthday! She’s been wanting to take this trip since she turned 50.”

The 10 of them flew out of Hartford, had a layover in Minneapolis and landed in Fairbanks. Their 10 days included a cruise down the Chena River with stops at fishing villages and the famed sled-dog training facility of Iditarod champion Susan Butcher, two nights at the Princess Wilderness Lodge in Denali, wildlife-viewing guided bus tours and a train trip through Denali National Park, and a five-day, 1,700-mile Voyage of Glaciers cruise that ended in Vancouver.

“The glaciers that we saw were Hubbard Glacier, Lamplugh Glacier and Margerie Glacier,” Kurt said. “They were all beautiful in their own way, but I thought that Hubbard Glacier was the biggest and most interesting being that we saw lots of calving, where ice chunks fall off the glacier and float in the water.”

The view from the train “was endless mountains including seeing the peak of Denali and its two adjoining mountains, Mount Foraker and Mount Hunter, which can only be seen on a crystal-clear day like we had…

“Halfway through the trip there was a scene straight out of National Geographic, where a moose and her calf were swimming across a river and a grizzly bear was on the far side of the river fishing.”

The Theis boys “both loved the trip. Although it was exhausting travel some days, they barely complained and just enjoyed the sights,” Kurt said.

“Evan loved the glaciers and the animals we saw. Henry loved everything we saw. He couldn’t spend enough time in the gift shops and promptly asked if we could move there. He said his favorite part was when we were cruising from Ketchikan to Vancouver and seeing the pods of Orca whales while we were eating dinner.”

What surprised Kurt? “How much of the land was undeveloped and untouched and the sheer size of mountains. Denali, formerly known as Mount McKinley, is four times the height of Mount Marcy, the highest peak in the Adirondacks…Denali National Park is the same size as the Adirondack Park, roughly 6 million acres…

“I was surprised how warm it was there — they did say that they were having a heat wave. It was close to 90 degrees for a couple of days in a row and we could still see snow on the mountains throughout our whole trip.

“One tour guide said ‘if the snow isn’t melted on the mountains by July 4th, it isn’t melting this year!’ We all chuckled at that tidbit. I was also surprised that there are no reptiles in Alaska.”

Kurt says, “I loved every aspect of this trip…Seeing the looks on my kids’ faces when they saw several moose, grizzly bears and all the wildlife was worth the trip in itself. There is so much more to see, and what we did see was absolutely incredible.

“This trip is a must-see for anyone of any age. There were people of all ages on the cruise and I think that I can safely say that everyone on this trip saw what they came to see and enjoyed almost every aspect of our trip from the cruise to the bus trips and train trips….

“I would definitely go back, and do less port-to-port and more things off the beaten track. And I would fish the next time. The salmon up there are incredible. It would be neat to reel one of those in!”

Kurt said Caitlin and Scott “did excursions in every port. They went ziplining in Ketchikan, kayaking in Juneau and four-wheeling in Healy.”

The nine-year-old Evan is a little more restrained. “I would go for a couple of days,” he said.