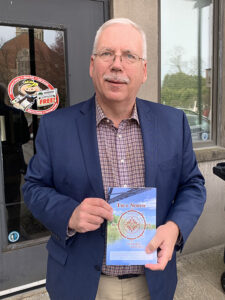 Sterling Goodspeed, the former Warren County District Attorney and former Johnsburg Town Supervisor, has written a book of short stories — True North — that is interesting, gutsy and I found well worth reading.

“Congratulations,” I emailed Sterling. “It’s a feat that you’ve accomplished. You write well and have things to say.”

It’s gutsy because Sterling, a 7th generation resident of North Creek, lets it rip — daring to give rein to his imagination.

“Sort of like standing in church naked,” he described it to me.

“It is one of the most difficult things I have ever done and it is very difficult and stressful to put it out there.”

There are 9 stories in the 133-page paperback. I read it in just a few days.

Several stories have stayed with me, especially “The Shaft.”

It starts with some boys braving the beams on the underside of the railroad bridge over the rocky Hudson River. It leads to their discovery of an abandoned mine shaft on the other side, then to details of the titanium operation there in World War II — and now a violent incident in which a man is killed.

I said to Sterling: Naturally, my thought is: How much of these stories is based on actual people and events? I’m assuming The Shaft — my favorite story — is. Was that you on the underside of that bridge over the river risking limb and life? Was Wheat Thin a real nickname? Was somebody killed in that building?

Sterling only reveals so much.

“Mark,” he replied, “to generalize, the storylines are fiction but the background and context are often real. Each story stands individually but can also be read as a historic progression of a small, rural Adirondack community through six decades. The common character linking the stories is the town.

“The bridge in The Shaft and on the cover is 28N leading out of North Creek toward Minerva. In my early teens friends and I did some stupid climbing on the support beams.

“There really is a shaft, and one summer in the mid 1970s myself and a couple of friends discovered it in the woods not far from the bridge. During World War II titanium was moved out of the plant via conveyor belt up the shaft and loaded in train cars…The Shaft is a truly scary place. The rest is all fiction.”

Another story, “High Crimes and Gewurztraminers,” is premised on Hitler’s secret granddaughter having settled in North Creek. I had to ask about it.

“No direct Hitler connection in North Creek,” Sterling replied, “but over the years I have known a significant number of Germans who resettled in the Adirondacks. One of them had a father who was a high ranking military official incarcerated after the war. The Americans and English would break him out of his cell at midnight and he would show them the best places to drink in Berlin.”

Sterling went on, “The story Skiing to School is taken from the fact that my father’s parents were caretakers at Barton Mines in the 1930s. If snow conditions made driving down the back of Gore impossible, my Dad and his brother would climb the back side of the mountain and ski Gore to a school bus pick up in the village.”

Sterling told me, “I finished these [stories] because of the pandemic. I became highly focused and learned in my old age that I could force myself to become more patient. If a story wasn’t working, I could put it away and come back a week or two later and not force things.

“The last story, True North, was written in April, 2020. Looking at it now, I can remember the bleakness of those days as COVID ripped through Manhattan. I had a client die about the time this was written. Rural addiction issues are very real in the Adks. Heroin is everywhere.”

Sterling says, “It is also available at Goodreads, Amazon, Bookshop.org, Book-baby and local stores across the Adks.”

He also notes, “I have a joint event with Glenn Pearsall at the Johnsburg Library on Sat, Dec. 10, 12 to 2.